Hammond’s U-turn on a bumpy road to Brexit 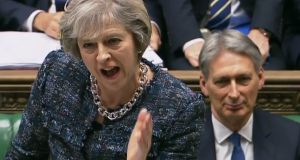 British prime minister Theresa May and chancellor of the exchequer Philip Hammond: Hammond’s humiliation sends an ominous message that May’s government can fold at the first sign of pressure. Photograph: AFP/Getty Images

Philip Hammond’s hasty U-turn on increasing national insurance contributions for the self-employed, one of the signature measures in his first UK budget, represents a severe blow to his authority as chancellor of the exchequer. The reverberations will spread far beyond Westminster, however, and will be observed closely in the chancelleries of Europe and within the Berlaymont in Brussels.

Hammond retreated after Conservative backbenchers complained that the measure was not only in breach of the party’s 2015 manifesto, but targeted one of their key constituencies. The Sun and the Daily Mail condemned what they portrayed as an attack on “white van man” and, by last weekend, 10 Downing Street was briefing that the chancellor had failed to warn the cabinet that his proposal contradicted a manifesto commitment.

The reversal will cost the treasury about £2 billion, spread over four years – small beer in budgetary terms. But its message – that Theresa May’s government can fold within a week at the first sign of pressure – is an ominous one for Britain’s EU partners.

Within weeks, Britain will start negotiating its withdrawal from the EU, and Conservative backbenchers and the Brexiteer press will be alert to the faintest whiff of compromise. The issue of Britain’s financial liabilities to the EU is especially neuralgic, with some Conservatives claiming that, instead of paying the EU to leave, Britain is owed £9 billion for its share of EU assets.

EU negotiators have watched with increasing alarm as May has pandered to the right-wing flank of her party in recent months, ruling out continued membership of the single market and the common external tariff, and declaring that the European Court of Justice must not make any decisions for Britain after Brexit. Hammond’s humiliation can only reinforce this anxiety, along with the impression that the prime minister sees no political threat from MPs who want a softer, more business-friendly approach to the negotiations.

The weakening of Hammond’s authority could exacerbate this trend, not least because he has been the strongest voice in cabinet for a negotiating strategy which put economic issues first.