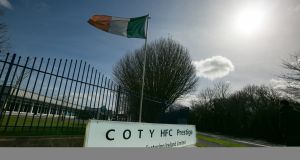 Coty decided to move Max Factor production from Nenagh to a newer plant in England with the loss of 200 jobs. Photograph: Brian Gavin / Press 22

As Ministers headed off for the annual diplomatic and foreign direct investment networking extravaganza that is St Patrick’s weekend, the news from home was exactly what they didn’t want to see in the headlines. More than 250 jobs disappeared in two major multinational employers – cosmetics giant Coty and drinks group Coca Cola.

The Coty blow was perhaps the more significant for a Government determined to sell Ireland as the best European country in which to do business once Brexit is formally triggered later this month.

Less than six months after acquiring the Nenagh factory from Procter & Gamble, Coty has decided to move Max Factor production to a newer plant it owns in England, despite the difficulties inherent in running a pan-European operation and supply chain in Britain once it leaves the European Union.

Coming in a week when the Government was crying foul to the European Commission over tactics used by rival jurisdictions, especially to tempt City-based financial services firms anxious to retain access to EU markets post any Brexit, the Coty blow only serves to raise further doubts about the Government’s Brexit strategy.

The bottom line, however, is that the Nenagh workers are fundamentally more expensive to employ that their peers in England. Ironically, the 200-plus staff are this week due to receive a €12,000 once-off payment agreed with the company at the Workplace Relations Commission to cover the loss of a share scheme and defined benefit pension arrangements they had enjoyed under P&G.

That’s on top of another one-off “loyalty” payment of between €5,500 and €12,500 from P&G that was recommended by the Labour Court and paid ahead of the Coty handover.

A generous redundancy package – also dating from the period of P&G’s ownership of the business up to last October – means workers will, on average receive payments of more than €9,500 per year of service. For some longer-term staff, the payoffs could come close to, or even above, €200,000 before tax.

Getting out of Nenagh is going to be anything but cheap for Coty. The longer-term benefits of moving production to an English plant, which will require investment to accommodate the new lines, must be substantial.