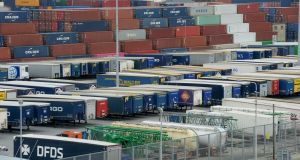 The increase in the value of exports was primarily driven by the sale of medical and pharmaceutical products and organic chemicals. Photograph: Alan Betson

The value of Irish exports hit a record €14.2 billion in October, driven by the movement of medical and pharmaceutical products abroad.

The rise in the value of exports was primarily driven by the sale of medical and pharmaceutical products and organic chemicals. These categories account for over half of exports with a value of €7.7 billion. The Republic’s export trade is dominated by pharmaceuticals, with most of the world’s largest pharma companies with bases here.

On the year, exports were up 16 per cent while imports had actually fallen 12 per cent. In the year to October, imports are down 3 per cent to €71.8 billion compared to the same period in 2018.

The big loser on the imports side is “other transport equipment, including aircraft”. The Republic is a major importer of aircraft due to the large concentration of aircraft lessors based here. Imports in that category dipped 43 per cent to €1.5 billion in the month compared to October 2018.

Exports to Britain rose 10 per cent to €1.3 billion in October compared to a year ago. However, exports there are down so far this year.

Exports to Britain accounted for 9 per cent of the total in the month while imports from there were 23 per cent or €1.8 billion of the value of total imports.

The EU as a whole remained our largest trading partner in the month, with 50 per cent of goods sold in the single market. Belgium accounted for €1.8 billion of the €7.1 billion total while Germany accounted for €1.5 billion.

Antwerp is one of the largest global drug redistribution hubs and receives most of the State’s pharma exports that are not destined for the US.

Our main non-EU trading partner remained the US, which accounted for 29 per cent of exports in the month. Some €4 billion of Irish goods were exported to the US while €874 million worth of their goods came here in the month.