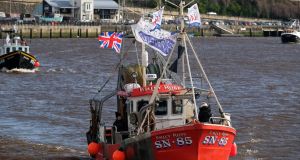 Minister for Marine Michael Creed told the Business Post: “What we will be saying is ‘you want your financial passporting into the European Union from the City of London . . . We want access to your waters’.”

Irish fishermen will have to be allowed into British waters as a “quid pro quo” if Britain wants its financial firms and airlines to retain easy EU access after Brexit, the Minister for Agriculture and Marine Michael Creed has warned. Speaking to the Business Post, he said : “What we will be saying is ‘you want your financial passporting into the European Union from the City of London and elsewhere, you want open skies and we want access to your waters’.”

The Revenue Commissioners are to launch a special audit crackdown of Airbnb hosts after analysing the results of a letter campaign to 12,000 providers of the short-term letting service. Samantha McCaughren reports that Revenue has told senior accounting representatives that it has already begun a pilot compliance programme. Compliance projects are typically implemented when Revenue believes there is a high level of risk of underpayment of tax in a particular area.

The head of An Post has blamed the Government’s “general incompetence” for citizens not being able to access a “full range” of State services through the post office network. In an interview with the Business Post, David McRedmond said “ if they want a post office network they need to start taking this seriously. [There] is an understandable desire to drive everything digitally – but they’re not. They’re not getting there.”

Tullow Oil’s former chief executive will walk away with more than €1.2 million from the company, the Business Post reports. It follows an almost €1 billion collapse in the firm’s share value last week on foot of a warning that its output will slump next year. McDade and Tullow’s head of exploration Angus McCoss were ousted following the shock warning last week that oil production from its main African wells in Ghana will fall next year.

Mortgage-to-rent company Home for Life has raised €75 million and plans to complete 1,500 deals with banks and so-called vulture funds next year to keep indebted householders in their homes, according to the Sunday Independent. The funding will allow Home for Life to raise up to €160 million more through an existing deal with AIB.

The paper also reports that Tesco has earmarked Dublin Airport as a potential site for a “click and collect” supermarket. However, it warns that the retailer faces a battle with local planners should it wish to pursue the project.

The Sunday Times reports that Euronext Dublin is facing the threat of losing its second-largest member by value if Kerry Group agrees to merge its business with the nutrition division of US chemicals giant DuPont. Kerry is being advised that the merged company would be listed in New York and London.

Finally, the paper reports that Italian restaurant chain Carluccio’s is planning to expand to 10 locations in Ireland next year. It currently operates locations at Dawson Street in Dublin and Glasthule Road in Dún Laoghaire. The company, acquired in 2010 by the Dubai-based Landmark Group, announced that it was seeking franchise partners as part of its 2020 expansion strategy.