German economy stagnating despite signs of end to industrial downturn 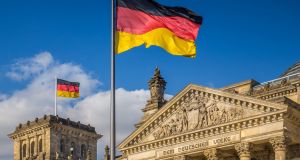 The German economy ministry said there were initial signs that an industrial recession could be coming to an end as orders stabilise. Photograph: iStock

The German economy is more or less stagnating, the economy ministry said on Monday, adding there were initial signs that an industrial recession could be coming to an end as orders stabilise.

The ministry also said in its monthly report that indicators at the start of the fourth quarter pointed to subdued private consumption even though disposable incomes continued to rise.

The news comes as Germany’s federal government and states have agreed to raise the price for carbon emissions to €25 per tonne from 2021, from the €10 originally planned, government sources said on Monday.

In the Republic, carbon tax has been set at €20 per tonne of carbon dioxide. In Budget 2020, this was raised to €26 on petrol and diesel but its application on heating fuels was delayed until May next year. The intention is for it to hit €80 by 2030.

In Germany, the lower house of parliament last month approved a major climate protection package to help the country achieve its target of cutting greenhouse gas emissions to 55 per cent of their 1990 level by 2030.

It envisaged a price of €10 a tonne for carbon dioxide emissions from heating and transport, but the opposition Greens, economists, business groups and activists criticised the amount, saying it was far too low.

The government sources said the carbon price would now increase annually, hitting €55 in 2025.

All the revenue from the higher carbon price will be used to reduce the fee consumers have to pay to support the country’s shift toward renewable energy, Germany’s Sueddeutsche Zeitung reported, citing the German dpa news agency.

Other German media said that the agreement paved the way for VAT on state-owned rail operator Deutsche Bahn’s train tickets to be reduced from January 1st, 2020. The government wants to make railway trips cheaper to discourage people from taking domestic flights.

Sueddeutsche Zeitung said the entire climate package could be passed by the Bundesrat upper house of parliament on Friday.

1 Election adds to headaches for AIB boss Colin Hunt
2 Irish people like nothing more than being bribed with their own money
3 Construction body calls for loan scheme to help first-time buyers
4 The Irish economy is thriving but if you’re not feeling it – here’s why
5 Climate apathy in Northern Ireland could impact on the Republic
6 Being in Nama regarded as stigma in UK, O’Flynn tells court
7 Irish banks face SME bad loans risks, warns debt ratings firm
8 Hogan warns Britain on US trade deal as EU set to impose tariffs
9 Fast-growing frozen food group has a strong appetite for success
10 Barclays to cut 100 senior roles as lender seeks to rein in costs
Real news has value SUBSCRIBE