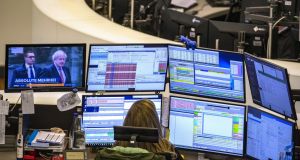 The pound rose on Monday, still boosted by last week’s British general election victory for the pro-Brexit Conservative party, even in the face of data showing that UK businesses this month suffered their worst downturn since mid-2016.

British prime minister Boris Johnson’s win saw the pound rally because the market perceives his party as the most able to end the Brexit uncertainty, which has harmed the UK economy and undermined investment in British assets.

UK Purchasing Managers’ Index (PMI) data for the services and manufacturing sectors in December underlined the weak state of the economy, however, in the run-up to the election.

The pound gave up some of its gains after the data but remained higher on the day. Having risen as much as 0.7 per cent in early London trading, it was last 0.1 per cent higher at $1.3342.

Against a broadly stronger euro, it did fall, shedding 0.2 per cent to 83.525 pence and away from the more than three-year highs hit on Friday of 82.78 pence.

While the pound has rallied sharply since Mr Johnson’s victory, it remains far below its levels before the Brexit referendum in June 2016, when it stood near $1.50 against the dollar and around 76 pence per euro.

Over the weekend, Conservative politicians repeated their pledge to bring the UK out of the European Union by January 31st and reach a new trade deal with the bloc by the end of 2020.

Mr Johnson intends to re-submit the Withdrawal Agreement Bill to the British parliament on Friday for ratification before Christmas.

“Generally, market participants are still relatively optimistic over the outlook for the pound following the strong Tory majority – that’s still encouraging demand for the pound even at these higher levels,” said MUFG analyst Lee Hardman.

Mr Hardman said that when investors’ focus will soon shift back to UK fundamentals.

He added that “given that Brexit will become less of an important driver of the pound, we’re likely to see the pound settle down, the high volatility that we’ve seen in recent months will start to ease back.”

The Bank of England meets on Thursday. It is due to publish its financial stability report and systemic risk survey results on Monday afternoon.

“The likeliness of a hawkish tilt in the message appears quite small, so the upside potential for sterling seems broadly limited in coming days unless we start to see some details on the WA (Withdrawal Agreement),” analysts at ING wrote.

In a sign of the shift in sentiment towards the British currency, speculators reduced their net short position against the pound to $1.861 billion (€1.669 billion) in the week to December 10th, the lowest level of shorts since May, according to weekly futures data.

The FTSE 100 was up for the fourth session in a row on Monday. The share index usually moves in the opposite direction to sterling, because its constituent companies are export-focussed, so the synchrony indicates that the potential for Brexit clarity is benefiting both domestic and internationally focussed companies. – Reuters