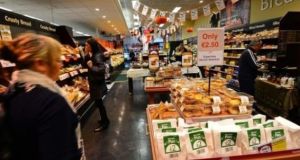 According to the data, prices were 0.1 per cent lower versus October

Consumer prices rose 1.1 per cent on an annual basis in November, partly as a result of higher rents and mortgage interest repayments.

New figures from the Central Statistics Office show education-related costs climbed 4.1 per cent in the year to November, with costs relating to property and utilities jumping 3.1 per cent.

There were also increases in the cost of food and drink consumed in restaurants and cafes and in hotel prices.

During the year, there was a 7.3 per cent rise in communication-related prices, while furnishings and household equipment and maintenance costs declined 2.2 per cent.

According to the data, prices were 0.1 per cent lower versus October, due primarily to decreases in communications and transport costs.

The Harmonised Index of Consumer Prices (HICP) rate, the measure used for EU comparative purposes, was down 0.2 per cent in the month, giving an annual inflation rate on this basis of 0.8 per cent, as against 0.6 per cent in the three previous months.

Economist Alan McQuaid said the latest figures were much as expected and showed that overall inflationary pressures in the economy remain fairly muted.

“Prices in general are likely to be higher in a post-Brexit environment, though that is still more likely to be an issue for 2021 and beyond rather than a near-term worry,” he said.

“However, with the Irish economy continuing to grow strongly, the more immediate concern on the domestic inflation front centres around increased wage demands, particularly in the public service. As the labour market approaches full employment levels, wage growth will pick up,” Mr McQuaid added.

The annual rate of inflation stood at 0.7 per cent in October, having eased from 0.9 per cent in September.