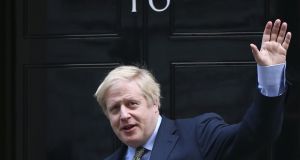 Boris Johnson at No 10 Downing Street following a meeting with the queen. Companies in the North fear he will view his victory as a signal that the “route is now clear” for his brand of Brexit. Photograph: Hollie Adams/Bloomberg

The UK election results may provide “some certainty” on Brexit but they are “not a mandate to force through a deal” that would not work for Northern Ireland, industry and farming leaders have warned the UK prime minister.

However, they say Boris Johnson’s overwhelming victory is also a “reality check” now for businesses in Northern Ireland. “Brexit is going to happen”, senior industry figures acknowledged on Friday.

Northern Ireland Chamber of Commerce and Industry chief executive Ann McGregor said the result was a vote to “end paralysis”, but it did not give Mr Johnson the green light to force through the wrong kind of Brexit deal for the North.

“The current deal, which effectively gives Northern Ireland two borders, should be a concern for all of us – not just business leaders and employers.

“Underpinning all this must be a concerted effort to restore powersharing at Stormont,” she said.

Companies fear Mr Johnson will view his Conservative Party’s comfortable majority in the House of Commons as a signal that the “route is now clear” for his brand of Brexit.

Stephen Kelly, chief executive of Manufacturing NI, which represents some of the largest employers in the North, said: “It’s Johnson’s deal to exit...or no deal. All other paths are now closed.

“For us this brings the potential of significant barriers to our trade with Britain and the resulting economic damage, so it is critical that our new MPs work together to derogate, mitigate and legislate to protect our place in the UKs internal market.”

Haulier representative Seamus Leheny said: “There can be no more speculation. What we know now is that this is the beginning of a new chapter for Northern Ireland, and we need to focus on mitigating the effects of the impending withdrawal agreement and the Irish protocol for NI trade.”

Farmers remain concerned about how the UK’s exit from the EU will impact on their livelihoods. Ivor Ferguson, president of the Ulster Farmers’ Union said that, for the first time in many years, his members have a bit of certainty.

“Our key objective from day one was to avoid a no deal situation and to secure trade that is as free and frictionless as possible east/west and north/south,” Mr Ferguson said.

“Now, going forward, it is important for Northern Ireland to be involved in the Brexit negotiations to ensure that the UK’s exit from the EU supports agriculture and the food industry, allowing it to thrive, and, above all, the future prosperity of family-farm businesses in Northern Ireland.”

Northern Ireland Retail Consortium director Aodhán Connolly worries that the Conservative majority could make it much harder for voices from the North to be heard.

“If the Brexit deal goes ahead as planned, there are going to be complexities and costs that haven’t been there before, which neither Northern Ireland businesses nor consumers can afford.”