Chris Johns: Tory voters will now want Boris to show them the money 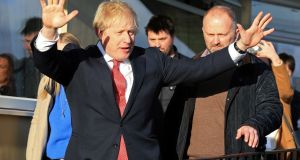 It is tempting to bang on about the fact that a majority of British voters went for parties that advocated Remain or a second referendum. But that would be to fight the last war. It’s time to move on, learn lessons and think about what could happen after a Brexit that is now all but done.

Fighting the last war is exactly what the Labour Party – particularly its committed core of hard-left members of Momentum – clearly intends to do. A feature of many extremists, particularly pseudo-intellectual dilettantes, is the priority they give to ideological purity over the messy business of winning and deploying power.

The Labour blame game has focused on two groups: the electorate and the centrists. Fault lies with anybody but Jeremy Corbyn and his cult. In a different context it would be funny. Post-election polling suggests two factors drove the evisceration of Labour’s core vote: Corbyn and Brexit (in that order, with dislike of all things Corbyn swamping a desire to “get Brexit done”).

A popular narrative is that working-class voters in the Midlands, Northern England and North Wales are economically left-wing and culturally conservative. They want Brexit, more public spending, better-paid jobs, less immigration and are turned off by earnest discussions about gender politics. Assembling a coalition of (former) steelworkers and Surrey stockbrokers reveals Boris Johnson to be a political genius.

The thing about popular narratives is that they are popular. For anyone genuinely interested in that business of winning elections, it is important to create that narrative and to offer it back to the electorate. It helps if it contains elements of truth but doesn’t really matter if it does not. Political strategists – good ones, anyway – know that it is equally important to manage shifts in that narrative.

With Brexit, the original proposition was: “I understand your pain and recognise your problems. Brexit will ease and solve everything.” There was (and is) pain and genuine grievance. The mistake the political class made was to think that stating the obvious truth – Brexit addresses none of these concerns – was an adequate response.

The narrative then changed: nobody talks about sunny uplands any more. Instead, a completely different message emerged: “The London elites think you are stupid for voting the way you did; they are determined to thwart your democratic rights. Get Brexit done and shove it back to those that sneer at you.” The class warriors loved that one. The urban elites’ response was feeble rather than condescending: they pointed out the lies rather than trying to wrest control of the narrative.

What happens next will be determined by who gains that control. One of the peculiar things about the hard right and the hard left is that they often espouse very similar policies. They are more interested in chaos than winning elections. In many ways they resemble old-fashioned anarchists. Johnson’s extremists will have to be seen off if he wants to win more than one election.

My guess is that a dramatic shift of narrative is imminent. Johnson would like nothing more than to banish Brexit from the headlines: he is as bored by it as the rest of us. Perhaps he will honour his promises not to ask for a transition period extension and deliver a negotiated deal that puts regulatory distance between Britain and Europe. And no customs checks between Britain and Northern Ireland (this one in particular is going to be very problematic, involving mind-numbing detail). And begin to negotiate – maybe even quickly conclude – a comprehensive free trade deal with the US. All by next December. If you believe all of that I have a bridge to sell you.

Johnson’s majority, personal authority and feeble cabinet suggest he can do what he likes. Any cabinet minister or backbench MP knows exactly what will happen if they dissent: they will lose the whip (be fired), just as Johnson did in recent months to others who stood up to him.

If Johnson wants to keep on board his new working-class voters, he is going to have to give them something

The question then naturally arises: what does Johnson want? Put differently, which promises will he break? I suspect he wants to remove Brexit from the narrative altogether. That may be impossible, of course; whatever happens next could still dominate the headlines for years to come. But that’s what he doesn’t want. An extension of the transition period and, ultimately, a softer Brexit would elicit a fight in the short term, which he would win, and then see Brexit’s salience shrink. But, as I said, we have few real clues about which version of Johnson is likely to turn up.

If –a big if – he wants to keep on board his new working-class voters, he is going to have to give them something. A stalled economy – the current situation – is not a good place to start, but he has a few years to correct that. The NHS will need more money. And money is at the heart of what happens next: those new voters are expecting some. We will find out if austerity is really over.

Where will the money come from? My guess is that he will take his lead from US president Donald Trump and borrow. Trump, of course, is borrowing on a massive scale to fund massive tax cuts for the rich. The nature of Johnson’s adherence to one-nation Conservatism will be his biggest test.