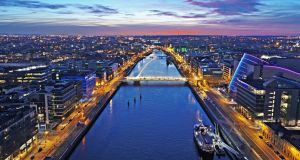 The single malt tax structure is one whereby a multinational with its headquarters in the US, places intellectual property in an Irish-registered but Malta-resident company. Photograph: iStock

The so-called “single malt” tax structure has not been made ineffective by US tax reforms, new evidence shows, despite Department of Finance expectations that those reforms would eliminate the ability of US multinationals to achieve low effective tax rates.

A report by non-governmental organisation (NGO) Christian Aid advanced evidence that at least one multibillion dollar US multinational has established a “single malt” structure as recently as July, 2018, “well after the imposition of new US tax rules”.

That comes after the Department of Finance told the Ireland Edition of the Times that US tax reforms should “in theory, eliminate the ability of US multinationals to achieve single-digit tax rates in respect of their foreign activities”.

The tax structure is one whereby a multinational with its headquarters in the US, places intellectual property in an Irish-registered but Malta-resident company. It then books non-US sales income into a second Irish-registered and Irish-resident company. The second company channels that income out of Ireland as royalties or licence fees paid to the Malta-resident company that owns the intellectual property. This, in effect, reduces the tax paid on the sales income in the countries where the sales are actually made.

Christian Aid’s report, seen exclusively by The Irish Times, has suggested that US company Teleflex, a speciality provider of medical devices, set up a company in October, 2017 which would subsequently take advantage of the single malt structure. Its three Irish directors resigned on June 19th, 2018, to be replaced by two Maltese directors. It also amended its articles of association to require that at least 50 per cent of the company’s directors always be Maltese residents.

The registered address for Teleflex Development Unlimited is an IDA business park in Co Westmeath. Teleflex was unavailable for comment on Monday.

Prior to opening a single malt structure, Teleflex operated a double Irish tax structure, according to Christian Aid. “Since Teleflex set up its double-Irish structure, through this and [presumably] other tax strategies its global effective tax rate has dropped to just over 3 per cent,” the NGO flagged.

A spokesman for the Department of Finance said, “the need for further action, if any, by Ireland remains under consideration”.

“US tax reform does not prevent a company being incorporated in Ireland and tax resident in Malta, but the potential US tax benefit of doing so should be eliminated or substantially reduced,” he added.

Donald Trump’s US Tax Cuts and Jobs Act shifted the US tax regime into one in which a US corporation’s US income is taxed in the country while its dividend income from subsidiaries around the world are exempt from US tax.

Other measures within the Act sought to reduce the tax benefit of shifting US income out of the country through tax-deductible payments to overseas subsidiaries.

Aside from the US tax changes, Christian Aid suggests that a recent corporation tax roadmap from the Department of Finance points to the single malt structure being protected. It said indications that the Republic has opted out of Article 12 of the OECD’s base erosion and profit shifting (Beps) framework, which is designed to counteract the practice of booking foreign sales through a low-tax country, mean the efficacy of the single malt structure will be protected as long as Malta continues to opt out of Article 4.

The Department of Finance said there was no connection between the rules in Article 12 and the single malt structure. A spokesman added that Ireland intended to opt into Article 4, which would have the effect of changing how the tax residence of such companies was determined.