One in five workers agree with higher taxes to subsidise childcare 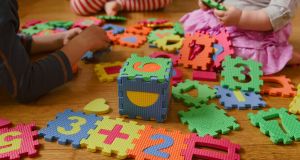 Some 18 per cent of those surveyed by Taxback.com said children were a “choice” and Government subsidies should not be provided. Photograph: iStock

Just one in five workers would be willing to pay more tax to allow the State subsidise childcare to facilitate more women in the workforce, a survey has found.

Although 78 per cent of people surveyed by Taxback. com supported subsidies towards childcare costs to encourage mothers back into the labour force, some 58 per cent of respondents said the funding should come from the existing tax pot. Some 18 per cent of those surveyed said children were a “choice” and Government subsidies should not be provided,” the company said.

“While previous surveys we have conducted, particularly on the housing crisis and homelessness, have indicated a great desire for action on the Government on primary social issues, the lack of willingness on the part of the public to reach deeper into their pockets to further fund the resolution issues like childcare is perhaps indicative of how stretched people already feel in terms of tax contributions, and feel perhaps that the onus is more on Government to allocate public resources more effectively,” said Taxback’s commercial director Eileen Devereux.

The survey of 1,600 Taxback customers across the Republic also found a selection of taxpayers opposed to an increase in the carbon tax. Asked about their support for an increase in carbon tax to help Ireland meet its climate change targets, 71 per cent of respondents said they wouldn’t support a tax increasing the costs of petrol, diesel, home heating oil, gas and briquettes.

Ms Devereux estimated that an increase in the carbon tax would hit families hardest, with a two-car family with multi-fuel home heating facing up to an additional €200 a year in carbon taxes.

“There’s no doubt that Budget 2019 will be a contentious one for the Government, and clear from our surveys that it will take more than ‘silver bullet’ spending tactics in order to improve public sentiment around our most pressing social issues,” she said.