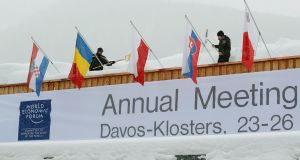 The WEF gathering of political and corporate leaders, alongside a smattering of celebrities, at Davos has itself been criticised for perceived elitism. Photograph: Arnd Wiegmann/Reuters

Ireland is the world’s eighth-most “inclusive” advanced economy, based on a measure from the World Economic Forum (WEF), which goes beyond economic growth data to look at living standards, environmental sustainability and protection of future generations from indebtedness.

The ranking marks an improvement on Ireland’s 12th place among 29 advanced economies in a similar report published by the WEF, organisers of the annual Davos conference taking place this week.

“Decades of prioritising economic growth over social equity has led to historically high levels of wealth and income inequality and caused governments to miss out on a virtuous circle in which growth is strengthened by being shared more widely and generated without unduly straining the environment or burdening future generations,” it said.

The WEF gathering of the world’s political and corporate leaders, alongside a smattering of celebrities, at Davos every year since 1971 has itself been criticised over the decades for its perceived elitist nature.

Norway has topped the list of the world’s most inclusive advanced economies, followed by Iceland, Luxembourg, Switzerland and Denmark. The UK came in 22nd and the US 23rd, with Italy, Portugal and Greece taking the bottom three slots on the list of 29 countries.

The index looks at a series of gauges, from GDP per capita to life expectancy, employment rates, median income, public debt, and carbon emissions based on the size of the economy and ratio of the young and elderly depending on people in the workforce.