Trump expected to be main attraction at Davos 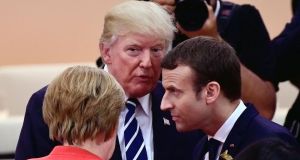 Tete-a-tete: Donald Trump, Emmanuel Macron and Angela Merkel at the G20 summit in Hamburg last year. They are all due to make speeches in Davos this week. Photograph: Thomas Lohnes/Getty

A year ago, as the world was coming to terms with the idea of Donald Trump as president of the United States, Xi Jinping took to the stage at the World Economic Forum, in Davos. Speaking to a packed conference hall, the leader of the Chinese communist party set out a robust defence of globalisation. It had not caused “many of the problems troubling the world”, he said; in fact, globalisation had “powered global growth and facilitated movement of goods and capital, advances in science, technology and civilisation, and interactions among peoples”.

Three days later, in his inauguration speech, Trump stood in front of the United States Capitol, in Washington, DC, and denounced free trade, evoking an image of the US as an industrial graveyard.

The astonishing spectacle of the Chinese president taking the lead on global trade as the United States stepped away from the system of economic interdependency that has underpinned international relations for much of the 20th century appeared to herald a change in the global balance of power.

This year things may be very different. In a surprise move, Trump will attend this week’s forum in the Swiss ski resort. (Xi will instead send his chief financial and economic adviser, Liu He.) The US president will be accompanied by a big entourage, including his treasury secretary, Steve Mnuchin, secretary of state, Rex Tillerson, commerce secretary, Wilbur Ross, and director of the National Economic Council, Gary Cohn, who as a former Goldman Sachs executive has attended Davos regularly.

Trump’s visit will be the first time in 18 years that a sitting US president has attended the forum. (The last was Bill Clinton, in 2000.) His decision to take part in an event that has become synonymous with the kind of global capitalism he railed against during his presidential campaign took many aback.

That its announcement coincided with Trump’s very public split with his former adviser Steve Bannon, in the wake of Michael Wolff’s book Fire and Fury, could signify a broader shift in the president’s economic thinking. Bannon was widely perceived as the architect of Trump’s America First policy, a man driven by an ideological desire to dismantle a global trade system that he believed damaged US economic interests. His departure could signal that the president is willing to move away from that kind of economic nationalism.

But all depends on the tone and nature of Trump’s appearances at Davos. The US president is equally likely to use his closing speech, on Friday, to criticise the champions of global trade. Just this week the president warned his Chinese counterpart, in a telephone conversation, that the United States’ trade deficit with China is unsustainable.

The US president is also likely to hold a series of bilateral meetings on the fringes of the forum; the White House has already indicated that a meeting with the French president, Emmanuel Macron, is in the works.

In many ways Trump should be comfortable in Davos. Given his experience as a businessman, and his boasts about his ability to strike deals, the back-room meetings and off-the-record tete-a-tetes where its real business gets done should appeal to him.

Although the World Economic Forum, now in its 48th year, offers an unrivalled schedule of speeches, debates and public forums, featuring leading business and economic brains, its value for most attendees is the opportunity to rub shoulders with some of the world’s most powerful people.

For journalists Davos is a first-rate opportunity for chance encounters with evasive businesspeople or elusive politicians. I have covered the forum for The Irish Times for three years. Within hours of arriving for the first time, I spotted an unsuspecting Denis O’Brien walking along a snow-covered road. After I accosted him from beneath my woolly hat and scarf, he graciously stopped to talk, politely saying that he couldn’t really disclose why he was there but directing me to some organisations he was involved with that were in attendance.

And after I inadvertently gatecrashed a champagne reception with Christine Lagarde, a British minister asked if I was one of the “20 most powerful women in business” who were being honoured at the event – not an entirely absurd supposition given that Davos is not known for its gender diversity.

Another time, as I walked through the Steigenberger Grandhotel Belvédère, in the centre of town, where dozens of competing parties seemed to be taking place, I spied Bono in the distance. Despite his heavy security presence the U2 singer stopped for a quick interview and spoke about the work of his Red organisation.

Davos may have its critics, but the annual summit shows no sign of slowing down as it approaches its 50th birthday. With President Trump set to bring his unique stamp this year, the 2018 World Economic Forum may be one to remember.

1 Why is Germany suddenly embracing its inner Keynesian?
2 Passengers face queuing in car parks at Dublin Airport
3 Major credit union plans to limit savings accounts to €40,000
4 In six months we will be in the grip of a 1980s-style recession
5 Revenue tells court it was entitled to raise €1.64bn tax assessment against Perrigo
6 Brother is dragging his heels as executor of uncle’s will - is there anything I can do?
7 Woodchester founder Craig McKinney dies
8 Tesco to cut emissions by converting waste food from Irish stores to gas
9 Ikea among major retailers to reopen next week
10 Land dispute between Citywest Hotel owner and neighbours before court
Real news has value SUBSCRIBE