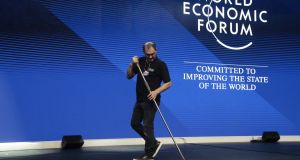 The closing address at the four-day Davos conference is due to be given on Friday by Donald Trump, the first sitting US president to attend the annual gathering since 2000. Photograph: Bloomberg

Almost 60 per cent of chief executives globally say they believe economic growth will improve in the next 12 months, amid a surge in US optimism on the back of US president Donald Trump’s economic agenda, according to a survey published on the eve of the World Economic Forum conference in Davos.

Optimism in global growth has more than doubled in the United States to 59 per cent after a period of uncertainty surrounding the country’s 2016 election, PwC said in its latest annual survey of chief executives.

That has fuelled a record-breaking level of optimism among almost 1,300 respondents globally to 57 per cent, up from 29 per cent a year ago, it said.

“Whatever about the political climate in the US, there’s no doubt but that corporate America is just riding a wave of optimism,” PwC Ireland managing partner Feargal O’Rourke told The Irish Times. “He has delivered tax reform, which has eluded the last number of administrations. He’s also rowing back on a lot of regulation. There is a sense that things are happening, at least on the business front.”

The enthusiasm among US business leaders for Trump’s “America First” economic agenda contrasts with the latest political polls, with a survey for NBC News and the Wall Street Journal on Friday showing that just 39 per cent of US citizens approve of the job Mr Trump is doing in office. His rating is the lowest number this poll series has found for any modern president a year in office, NBC News said.

Mr Trump is set on Friday to give the closing address at the four-day Davos conference in Switzerland, where the central theme of “creating a shared future in a fractured world”. He will be the first sitting US president to attend the annual gathering in the Swiss ski resort since 2000.

Mr O’Rourke said recent US tax reforms, cutting the main corporate rate to 21 per cent from 35 per cent, may trigger a “one-off slowdown” in companies that would ordinarily be planning to invest overseas. However, he said Ireland should continue to win its “unfair share” of foreign direct investment.

The wider sense of optimism in the PwC report comes as global growth is running at its fastest pace in six years. The World Bank moved recently to lift its forecast for global economic growth for this year to 3.1 per cent, up 0.2 of a percentage point from its previous estimate in June.

However, PwC said that even as Brexit negotiations continue, the rate of chief executive economic-growth optimism in the UK has increased to 36 per cent from 17 per cent.

The survey also found that 41 per cent of chief executives are concerned about terrorism, while 40 per cent fear geopolitical uncertainty and cyber threats, with worries over populism at 35 per cent.