The most valuable asset that Facebook possesses is the data that its users - so should it make a bigger social contribution for profiting from this? 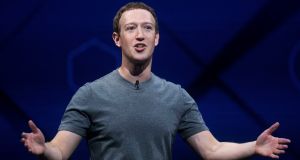 Facebook CEO Mark Zuckerberg should now live up to his rhetoric and launch a Facebook Permanent Fund to cover a broader universal basic income experiment. He should encourage other data businesses, such as Google, to contribute too. Photograph: Noah Berger/AP

The idea of guaranteeing a basic income for everybody has many obvious flaws but one overwhelming virtue. It enshrines the principle that every citizen is a valued member of society and has a right to share in its collective wealth.

That conviction has animated radical thinkers for 500 years since the argument was first sketched out in Sir Thomas More’s Utopia. The idea has gained renewed resonance in our own times as we fret about the erosion of living standards, the concentration of wealth and the possible threat of mass unemployment caused by technological change.

But for half a millennium universal basic income has remained little more than a utopian dream because it has always crashed up against the rocks of reality. The chief objections are ones of principle and practicality, encapsulated in two questions.

Why should people be paid to do nothing? And how could we possibly afford it?

Yet it is possible to design a basic income scheme that retains its main attractions while minimising its flaws. By default, a good working model has been operating in Alaska for more than 30 years.

In 1976 Alaska’s voters approved a constitutional amendment to create a permanent investment fund, financed by revenues from the state’s incipient oil boom. A few years later, the Alaska Permanent Fund began paying out a dividend to every registered resident.

Depending on the fund’s performance, the annual payout has ranged from $878 to $2,072 a head over the past decade. It is, in all but name, a universal basic income paid irrespective of social contribution or wealth.

The scheme has not led to mass indolence, as the critics of basic income fear. The clue lies in the adjective — basic. The scheme, which has commanded bipartisan support, has also proved increasingly popular and been described as the “third rail” of state politics because it electrocutes any politician who touches it. In a recent telephone survey, Alaskans described the fund’s top three advantages as being its equality of treatment, its fairness of distribution and its assistance to struggling families. Some 58 per cent of respondents said they would even be prepared to pay more state taxes to preserve the fund, although Alaska has been knocked by lower oil prices.

In spite of its natural resources, Alaska does not rank among the richest of US states in terms of gross domestic product per head. Yet, partly as a result of its annual dividend, it is one of the most economically equal states and has one of the lowest poverty rates.

Last month, Mark Zuckerberg, chief executive of Facebook, visited Alaska and praised the state’s social programmes saying they provided “some good lessons for the rest of the country”.

Like other Silicon Valley entrepreneurs, Mr Zuckerberg believes that thousands of jobs are going to be swept away by new technologies, such as driverless cars. In such a world, he says, we need to invent a new social contract. Basic income could be part of the answer.

Some argue that Alaska is a special case as it has just distributed the fruits of an oil bonanza. But it may be possible to find other sources of revenue to fund similar schemes elsewhere. Some have suggested a land value tax. Others have argued for a financial transactions tax.

But there is one other potential source of revenue that Mr Zuckerberg knows all about: data. If, as the saying goes, data are the new oil then we may have found a 21st-century revenue stream. Data could do for the world what oil has done for Alaska. Mr Zuckerberg’s concern for the marginalised in society is commendable, as is his commitment to building strong communities. Unlike most of the rest of us, he has the personal influence to help tackle the problems of our age. He runs one of the world’s most valuable companies and has a ready-made digital pulpit from which he can make his case to Facebook’s 2bn global users.

He should now live up to his rhetoric and launch a Facebook Permanent Fund to cover a broader universal basic income experiment. He should encourage other data businesses, such as Google, to contribute too.

The most valuable asset that Facebook possesses is the data that its users, often unwittingly, hand over for free before they are in effect sold to advertisers. It seems only fair that Facebook makes a bigger social contribution for profiting from this massively valuable, collectively generated resource.

His shareholders would hate the idea. But from Facebook’s earliest years, Mr Zuckerberg has said his purpose has been to make an impact rather than build a company. Besides, such a philanthropic gesture might even prove to be the marketing coup of the century. Facebook users could continue to swap cat pictures knowing that every click was contributing to a greater social good.

Such a data-for-basic income swap is simple and clear. It should appeal to the solutionist mindset of Silicon Valley. Many tech entrepreneurs are suspicious of government intervention.

But there is no rule to say that only governments can be in the wealth redistribution business.“We should explore ideas like universal basic income to give everyone a cushion to try new things,” Mr Zuckerberg told Harvard graduates in his Commencement address in May.

Quite right, Mark. Give it a go.

1 State subsidises public sector retirees to cover gap until State pension
2 Who are Ireland’s 17 billionaires?
3 My father in a nursing home wants to gift me his house
4 Trump holds America up as ‘example for the world’
5 Are there annual limits on inheritances or gifts to a child?
6 Countries that fail to attract immigrants will lose out – Microsoft chief
7 Nama lends Cosgraves €15m to fund huge apartment development
8 Corporate tax change is inevitable, says Donohoe
9 Cubic Telecom raises more than €11 million in funding
10 Protect yourself against accidents on your property
Real news has value SUBSCRIBE