Working with the troika was mortifying, but it turned Ireland around

John FitzGerald: As well as overhauling banking, the EU has treated Ireland fairly 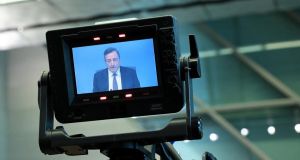 Mario Draghi: his announcement in 2012 that the European Central Bank was ready to do whatever it took to preserve the euro was a crucial change of stance. Photograph: Krisztian Bocsi/Bloomberg

It was not only Ireland that was unready for the financial crisis that began in 2008: the European Union lacked the institutions to head off the crisis or deal with it efficiently. But lessons have been learnt, and not just in Ireland.

Major reforms and institutional changes have been made by the EU that should help prevent a similar form of economic crisis – and better deal with the fallout in the event of a crisis of a similar scale.

The events of 2008 showed how easily a national financial disaster can become a crisis for the European Union as a whole, through the contagion effect of interlinked international finance. So the first lesson learned at EU level was that banking regulation needed not only to be more robust but also to apply across the bloc.

Ireland’s financial-sector bailout was performed under the old rules, so the State was forced to pay failed banks’ senior bondholders. This added about 10 per cent, or about €5 billion, to the gross costs of the bank rescue. The net direct cost of the bank rescue, after asset recovery by Nama, and sale of the State’s shares in the banks, will be about half of the gross rescue costs – maybe €30 billion.

Since then the framework within which the EU banking system operates has been transformed. EU regulation of banks has been strengthened and capitalisation requirements set at appropriate levels.

For the future, rather than protecting banks’ senior bondholders, the new regime requires that such bondholders take the hit in a banking collapse. This principle has recently been implemented in resolving an ailing Spanish bank. These measures, taken together, should provide much-improved protection to EU taxpayers.

But a final piece of the new architecture is needed. Any future bank collapse that ultimately needed taxpayer money would reflect failure of oversight and institutions at the EU level. The natural corollary of this is that the European Union taxpayer, not the national taxpayer, should pay for any such EU-wide mistake.

A second change has been the establishment of the European Stability Mechanism. When Ireland needed financial support after the crash there was no appropriate mechanism to provide such assistance. In addition, when arrangements were put in place to provide support, they involved continuous recourse to individual national parliaments for approval.

This made negotiations on getting support very difficult and caused major uncertainty about the outcome. Negotiating with the International Monetary Fund was easier than it was with the EU, as ultimate decisions were made by the IMF board. That board may be representative of governments, but the IMF’s decisions did not require endorsement by individual governments.

The new European Stability Mechanism arrangements, although still not ideal, provide a more streamlined source of support than the former system, and they offer a better prospect of a coherent and rapid response for governments in crisis.

A third crucial change was the announcement by Mario Draghi in July 2012 that the European Central Bank “is ready to do whatever it takes to preserve the euro”. For both Ireland and the EU it would have been preferable to have had such a commitment much earlier in the crisis, but it took four years for the ECB to reach the point where this could be explicitly stated. Draghi needed to bring the governing council of the ECB to a point where they would either accept this commitment or, at least, not oppose it. There was a need to persuade Germany that such a policy, if not desirable, was acceptable and truly within the ECB’s remit.

That suitable institutions were not in place in 2008 made for a much bumpier ride for countries requiring assistance. Although the handling of the crisis by the existing EU institutions left something to be desired, in the end it worked. The euro did not collapse, as many had predicted. The economies of Ireland, Portugal and Spain have all rebounded, benefiting from the support of EU partners and the EU institutions.

The major bailout assistance Ireland received has greatly facilitated our rapid recovery since 2012. After the promissory-notes deal the support given eventually turned out to be on very favourable terms – the servicing of our debt burden is at a much lower interest rate than it was after the last crisis of the 1980s.

Working so closely with European Union institutions and the IMF to achieve the turnaround may have been mortifying, but it produced the desired result.