‘If businesses can be kept alive they can grow again’

Top 1000: With the country suddenly mired in the worst recession in living memory, what do companies need to survive the pandemic? 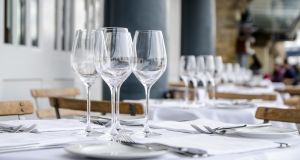 The Irish hospitality sector has been hard hit.

Whiskey entrepreneur John Teeling stops short of saying the lockdown was a mistake, but he believes the impact on the economy was far greater than anyone expected.

“I have doubts about giving control of the economy to technical bureaucrats… they may have paid lip service to the damage that was being done, but I don’t think they realised the extent of it,” he says.

“When you stop demand so completely, when all of a sudden you have a 100 per cent loss of revenue, firms go bust.”

Teeling, who founded Cooley Distillery and now owns Great Northern Distillery in Dundalk, suggests the contraction in the economy is likely to be greater than the models suggest – the Government is currently expecting a 10.5 per cent contraction – and that recovery in the hard-hit hospitality sector could take up to two years.

When all of a sudden you have a 100 per cent loss of revenue, firms go bust

His whiskey business, which supplies to most of the big players here, has been relatively insulated from the crisis so far, largely because it sells in bulk over longer time frames.

He has temporarily repurposed half of the group’s grain whiskey distillery into a sanitiser production line, producing 80,000 litres of it a week for hospitals, shops and care homes.

He pins his hopes for the economy to what he calls the “sunrise industries” - pharma and IT - which he believes can drag the economy out of the mire, similar to what happened after the 2008 financial crisis.

Dalata, which operates the Clayton and Maldron chains, has temporarily closed 29 of its 44 hotels and laid off 3,500 of its 4,500 staff. It can survive for six to eight months without revenue, says McCann. It owns many of the hotels in its portfolio meaning it could leverage further credit potential.

He believes 2021 will be about regrouping and that it will be 2022 before normal activity resumes, with cash flow the biggest potential fault line for businesses.

“Most hospitality businesses run through their cash reserves in the winter and replenish them in summer. The virus and the lockdown has caught them at the low point.”

According to Neil McDonnell, chief executive of the Irish Small and Medium Enterprises Association (Isme), the average SME has a non-payroll creditors’ ledger of €78,000, which he estimates to be worth €11 billion across Ireland’s 140,000 SMEs.

For companies that are looking at three to six months of zero revenue or significantly reduced revenue, how do we provide an equity model that keeps them viable?

This debt is owed to thousands of small businesses for food, drink, stationery, cleaning, accountancy, distribution, materials and much more, he says. If it is not repaid, the viability of the businesses to whom the debt is owed will be fundamentally undermined, McDonnell says.

The Government has put in place around €1 billion in liquidity supports through the Strategic Banking Corporation of Ireland (SBCI) and MicroFinance Ireland, repurposing some of the schemes which had been put in place for Brexit.

But business lobby group Ibec says this isn’t enough, pointing out that many of the schemes charge interest of around 4.5 per cent, unaffordable for many SMEs.

“The first wave response is the life support of liquidity, but there is a growing conversation across Europe about what the debt burden for the private sector is going to be after all these liquidity supports are provided,” says Ibec’s director of policy and public affairs Fergal O’Brien.

The reliance on so much debt will leave deep scars after the pandemic, he warns.

“For companies that are looking at three to six months of zero revenue or significantly reduced revenue, how do we provide an equity model that keeps them viable?”

After the financial crisis, the Government rebranded the National Pension Reserve Fund as the Ireland Strategic Investment Fund (ISIF). It now invests in companies with significant growth potential.

“We do have a model. The challenge is how to upscale it significantly and apply it across more sectors of the economy,” O’Brien says.

In terms of the overall crisis response through spending and liquidity supports, the European average is about 20 per cent of gross domestic product (GDP), but Ireland’s amounts to €12 billion or just 4 per cent of GDP.

This must be increased significantly if we’re to avoid mass insolvencies across the private sector, O’Brien says.

One state agency that got an early sense of the incoming storm was Enterprise Ireland (EI). It has offices in Beijing, Shanghai and Hong Kong and was getting daily updates from staff.

“If businesses can be kept alive they can grow again and potentially rehire the staff they were forced to let go,” he says.

Healy praises the Government’s move to furlough workers through its Wage Subsidy Scheme, through which the State pays up to 85 per cent of employee wages during the crisis.

It’s a new concept in Ireland, but it may end being adopted as a permanent feature of our employment landscape.

The Top 1000 magazine is published with The irish Times on Friday, 12th June.