Lights out, cameras off, action stopped as film and TV projects halt

Top 1000: Until the crisis hit, studios in Ireland were not only thriving, but expanding. What next? 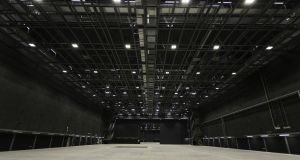 Belfast Harbour Studios applied for planning permission to quadruple the size of its existing complex.

In an isolated corner of Northern Ireland a small number of aged, wooden buildings sit on the edge of Torr Head, a stone’s throw away from the Irish Sea.

They appear ancient, but this “Viking village” is only a couple of months old, built recently as part of the film set for The Northman. It was scheduled to bring A list Hollywood stars including Nicole Kidman, Willem Defoe, and brothers Alexander and Bill Skarsgård to Northern Ireland.

Filming was already underway on the project, which was to be chiefly based at Belfast Harbour Studios, but like many other film and television projects across Ireland, North and South, production had to be suspended because of the coronavirus crisis.

The producers behind The Northman have said they “fully intend to make the film”, but with the pandemic continuing apace across the world, no one can commit to a time frame.

According to Richard Williams, chief executive of Northern Ireland Screen (the North’s national screen agency), all major film and television productions are halted for an indefinite period.

“We have to just wait and see what happens next. We had a very a significant boom in Northern Ireland, with a lot of large-scale production activity and demand for studio space.

“All production in Northern Ireland has now ceased and the industry is facing considerable challenges. It will be difficult economically and nobody knows how long this hiatus will last,” he said.

Thanks to the legacy of Game of Thrones, one of the most watched television shows on the planet, the Northern Ireland film and TV industry was in pretty good shape before the pandemic struck.

“You’re only as good as your last project, but we have the reputation that we can deliver. We’re also in the lucky position that we have so much to offer such as the lack of distance between locations and studios, and that Northern Ireland offers a much lower cost of living and lower production costs. We also have other important selling points like the studio space we have to offer and the available tax credits.”

During the course of its eight seasons the production of Game of Thrones in the North brought £251 million (€281 million) into the local economy and it’s no secret NI Screen would like to replace it with another big budget production.

Before the Covid-19 crisis, Northern Ireland had been well placed to benefit from the huge demand for content from television, streaming, games and specialist productions for children.

The first animated feature film to be made in Northern Ireland also went into production last year as the Derry-based creative studio, Dog Ears, joined forces to produce Puffin Rock with Kilkenny based Cartoon Saloon and Penguin.

The industry is facing considerable challenges. It will be difficult economically and nobody knows how long this hiatus will last

“Our games sector is very exciting at the moment and is having great success with the likes of Holywood-based Italic Pig, which is involved in the first seven-figure game to be produced locally. It is working with The Irregular Corporation on Paleo Pines which will be very important to the development of the video games industry in Northern Ireland.

“There’s also a lot of great development teams based at Pixel Mill, Northern Ireland’s games company incubation space at the Ormeau Baths. Both the animation and games sectors will hopefully weather the Covid-19 storm, and we expect to see strong growth and further investment in these newer sectors,” Mr Williams added.

But when it comes to the investment schedule for new studio space in the North, that picture may be less clear.

“Prior to coronavirus, global demand for studio space was at a premium. Disney has recently taken a long-term lease on all of Pinewood’s space and Netflix has a similar arrangement with Shepperton. That will create a lot of demand from other global content providers. Although it’s too early to fully understand the impact of the current situation, we expect that the need for space, coupled with Northern Ireland’s international reputation, will spur further growth locally,” Mr O’Neill said.

If the planned studio expansion goes ahead Belfast Harbour estimates that it could support an additional 1,000 creative industry jobs in the North.

Although Mr O’Neill admits that while no one knows what the long term impacts of Covid-19 might be on the screen sector he remains optimistic that Belfast has an important role to play.

“We believe given the number and popularity of streaming services and the need to create new content, there will be increased demand for studio space after the crisis is brought under control.

For the moment Belfast Harbour is progressing its plans to expand its studio portfolio and is in the process of securing planning permission for its latest development.

It isn’t only Belfast that has had to rewrite the script for 2020. Covid-19 has also forced the shutdown of one of the biggest budget productions in Ireland this year at Limerick’s Troy Studios.

Foundation, which is based on Isaac Asimov’s books and was one of the first series to be commissioned for Apple TV+, had been well established at Troy Studios before its producers had no choice but to mothball it because of the coronavirus.

But according to Paul C Ryan, who heads up Screen Ireland’s Film in Limerick office, the huge, global appetite for content” and the facilities that Limerick can offer will continue to prove attractive to both major big screen and small screen productions in the future.

Mr Ryan believes Limerick can build on Apple’s endorsement of Troy Studios - which covers 350,000 sq ft and includes 70,000 sq ft of sound stages - despite the challenges the sector now faces.

“We are still continuing to promote what Limerick and the midwest now has to offer. Not only do we have Troy Studios, but we also have stunning locations close by.

“We are working hard to make it easy for TV and film production companies to come here and to enjoy being here. We have attractive tax credits of up to 37 per cent available and we have great, local talented crew. Before the crisis, there was a huge demand for quality content, particularly because of streaming services, and that demand will still be there,” he said.

Wicklow will do everything in its power to assist the recovery of the screen sector.

Both Belfast and Limerick also hope the economic benefits and significant employment opportunities the screen industries have brought to both cities will not be significantly affected in the short term.

They are not alone in waiting anxiously to see what happens next for the island’s film and screen hubs.

But she is confident these productions will remobilise once it is safe to do so and has promised that Wicklow County Council and the Wicklow Film Office “will do everything in its power to assist the recovery of the screen sector”.

“There is a very strong and well-established industry cluster in the county, which was built up over many years and which has weathered many challenges, such as the foot and mouth crisis during the filming of Reign of Fire in the Wicklow Mountains,” Ms Delahunt said.

She believes having two large film studios within close proximity of Dublin – Ardmore and Ashford Studios – and the fact that Wicklow can offer “an amazing range of versatile locations as well as very talented and experienced crew” will also help the county to attract further, new international projects.

Ms Delahunt added: “We are continuing the development of an enterprise hub at Wicklow County Campus in Rathnew, specifically for the content creation sector. This will offer a host of business development supports and we are convinced that it will further strengthen the wonderful production companies and startups here.”

The Top 1000 magazine is published with The Irish Times on Friday, 12th June.

Bundee Aki’s Connacht return could come against Ospreys on Sunday