Tough times for tourism trade as it absorbs coronavirus shock

Top 1000: Few industries have suffered the blow of Covid-19 as much as travel 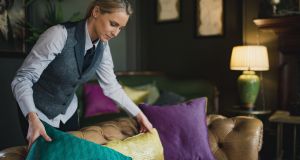 The United Nations World Tourism Organisation has predicted a near $450 billion (€398 billion) decline this year in tourism’s $1.5 trillion global revenues,

In mid February, Carrick-on-Shannon hotelier Joe Dolan was preparing for the 2020 season ahead. The tourism sector, especially in Border areas such as Leitrim, had just dodged the bullet of a no deal Brexit and the Bush hotel owner was looking forward to some much-needed trading certainty.

By mid-March, he was mothballing the business and letting go his staff of more than 50 workers. With little warning, the Covid-19 crisis exploded like a bomb under the tourism sector, turning the 2020 season into a virtual write-off. Industry leaders say it will take several years to recover.

“March 15th, when I shut the hotel, was a heart wrenching day,” said Dolan, who is also a director of Failte Ireland, the national tourism authority. “My wish is that I can take back on every single one of my staff as soon as possible.”

The Bush, a 65-bedroomed traditional property that has been operating since the 18th century, is one of the oldest hotels in Ireland. Rarely has it witnessed more turbulent times than this. Few sectors globally were hit as hard by the Covid-19 lockdowns as tourism and travel.

The United Nations World Tourism Organisation has predicted a near $450 billion (€398 billion) decline this year in tourism’s $1.5 trillion global revenues, and the loss of between five and seven years of growth. Assuming the virus is kept under control in the second half of the year, UNWTO estimated that international tourist arrivals in 2020 may yet fall by close to 30 per cent. The longer the crisis wears on, the more optimistic that assessment appears.

To put the dizzying impact of coronavirus in perspective, the 2009 global financial crisis sparked a decline of 4 per cent in international tourism, while the Sars epidemic in 2003 caused a hit of just 0.4 per cent. Up to 50 million tourism jobs are at risk due to the pandemic, says the UNWTO.

“This crisis is like no other,” said the agency.

Closer to home, the Irish Tourist Industry Confederation (Itic) has predicted a 70 per cent fall in Irish revenues from overseas tourists this year to €1.6 billion. Itic believes industry revenues in the first quarter of the year declined 60 per cent, which will likely be followed by an 85 per cent drop in the three months to the end of June, a 70 per cent predicted fall for the peak summer quarter, and 50 per cent in Q4.

The confederation says there is “little international visitation to be reasonably expected” in 2020. Industry operators are already proceeding on that basis.

Pat McCann, the chief executive of the Dalata hotel group, said this year is all about “making sure you survive”, as he predicted that variations on the lockdown restrictions could persist until September. He has stress tested the group to see if it could survive the rest of 2020 with almost no more revenues at all.

As with most tourism businesses, Dolan’s biggest concern, after his staff, is maintaining cash reserves. Even a shuttered hotel accumulates overheads, such as insurance and property costs. “It cost €5,000 per week to stay closed and that’s a hole that needs to be filled,” he said.

Dolan says he sought flexibility from his banks while he also suggested that one of the State-backed liquidity schemes could help his business if required. He said he was “really cross”, however, at his insurance company, which sought payment in full. The monthly insurance bill at the Bush is €5,000.

“My insurer wants me to pay as it we’re open for business, and then we’d see if a partial refund was possible at the end of the year. That’s simply not good enough,” he said.

Failte Ireland hopes many local tourism businesses will be able to pivot towards the domestic market to pick up some of this year’s slack, assuming the virus can be kept suppressed and relatively free movement of people can be maintained.

Dolan’s hotel is already geared towards the home market, which accounts for 72 per cent of sales. So the Bush may be in a better position than most. Tourism businesses in hotspots for international visitors, such as the southwest and Wild Atlantic Way, may have to dig deeper.

The industry is looking ahead to how it might recover in the years ahead. Government officials and industry leaders have even discussed a possible rerun of the Gathering, a 2013 initiative to tempt members of the Irish diaspora to holiday on the old sod. It helped to reboot the tourism sector after the last major recession, and brought in about €170 million in direct revenues.

Itic welcomed the idea of a new Gathering to draw in visitors, but cautioned that there would have to be sufficient lead-in time to allow planning. Some industry leaders think 2021 could be too soon. The following year may be seen as a better bet.

Next year is simply to “build back the business”, said Dalata’s McCann.

“2022 is probably the year when we get to some level of normality.”

The Top 1000 magazine is published with The Irish Times on Friday, 12th June.