The winners and losers in Ireland's top 1000 companies 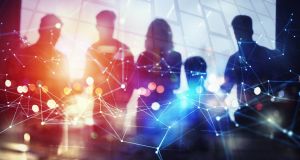 Apple remains top of our Top1000 list, with revenues of almost as much as the rest of the top five companies combined.

Given supply chain disruption and uncertain consumer demand, not to mention some business sectors more or less grinding to a halt, the top-performing companies in our listing are sure to be affected by the current crisis.

Their most recent results, however, generally continue to tell a story of consistent performance at least and startling growth at best.

Apple remains top of our Top1000 list, with revenues of almost as much as the rest of the top five companies combined. Its turnover fell from €119.2 billion last year to an estimated €116.8 billion in 2019. We have based that figure on lower global revenues and on last year’s figures, which emerged as part of a European Commission investigation into the company’s tax affairs.

Apple’s revenues will likely take a hit this year too -- smartphone sales plummeted in the first quarter and last month the tech giant pulled its guidance for the third quarter due to the pandemic. That said, its second quarter results were good, with revenues up 1 per cent year on year due to strong performance in services and wearables.

Google, which is partnering with Apple on a Bluetooth-based contact tracing platform for Covid-19, holds steady in second place. It may have a way to go to catch Apple, but it performed strongly last year, with revenues for Irish operations up to €38.1 billion in 2019 from €32.2 billion the previous year and €26.2 billion the year before.

With a marked slowdown in ad revenues already noticeable in March due to the crisis, this year’s financial results may not be quite so stellar.

Microsoft had a storming year, with revenues attributed to its Irish operations soaring to €33.7 billion from €18.5 billion, which saw it leap to third from seventh in our top 10. This performance mirrored its spike in global revenues, much of which was driven by increasing adoption of its commercial cloud products.

New to our top 10 is Johnson Controls, which performed one of the largest tax inversions in history in 2016 when it merged with Tyco International and became domiciled at its Cork plant.

Given that new arrival to the top 10, Medtronic slipped from fourth to fifth in our listing, despite its turnover rising to €27.6 billion from €26.7 billionin last year’s listing. Its pretax profits dipped slightly, however, falling to €4.8 billion from €5.1 billion. Despite strong global interest in its ventilators, Medtronic has warned the Covid-19 crisis is likely to negatively affect its results this quarter.

Similar to Google, it also saw ad revenues decline sharply in March although the company says this evened out somewhat in April. Nonetheless, it has also declined to provide revenue guidance for the rest of the financial year due to global economic uncertainty.

In our list, CRH has fallen to seventh from third in last year’s edition, with overall revenues down to €25.1 billion from €26.8 billion. Next year, as we have seen, could be an entirely different story for the Irish behemoth.

Eaton Corporation also dropped a couple of places in our list, falling from fifth to eighth, although its turnover actually rose to €19.7 billion from €19.3 billion. The power management giant says its businesses are deemed essential by most governments so the bulk of its operations are still running. Regardless, it too has withdrawn its financial guidance for the rest of the year and expects the crisis to have some impact on its revenues.

The top 10’s other Irish representative, waste management and recycling firm DCC, had a steady year, with revenues rising to €17.2 billion from €16.7 billion.

Other notably strong performers in the upper echelons of our top 1000 include Glanbia, Applegreen and meat processor Dunbia, all of which showed marked revenue increases and jumped between 10 and 20 places in our list.

As for the next year, we’ll have to wait and see if the recent flood of profit warnings and dire prognostications have been justified. Our top 10 may change and the Top 1000 as a whole may look very different.

How did financials fare?

Before normal business operations were so sharply disrupted earlier this year, it had been business as usual for most if not all of the top 80 financial companies in the Top 1000.

Indeed, the top five institutions (ranked by the value of the assets they hold) remained mostly unchanged, with Bank of Ireland leading the way, followed by AIB, the Central Bank and Irish Life. Each of those saw assets increase by about 7 or 8 per cent over the year.

Barclays Bank Ireland is now the fifth largest bank in Ireland, by balance sheet size. Its assets skyrocketed by almost 450 per cent last year to €69 billion as it became the British banking giant’s European Union hub in preparation for Brexit. It ultimately plans to hold over €250 billion in assets here, which would make it the largest bank in the country by the measures used in this ranking.

Another notable mover among financial companies was Bank of America Merrill Lynch, which soared from 41st to sixth in our ranking, with its assets increasing to €50.5bn from €4.5bn on last year’s list. This was due to a significant increase in the cash held at central banks and the addition of almost a €25m loan book to its balance sheet, following a restructuring of its European operations.

As the coronavirus cyclone sweeps through the Irish business landscape, few companies will remain unscarred. We are, after all, facing one of the biggest recessions in history, with the European Central Bank forecasting the euro zone economy could shrink 12 per cent this year.

Some sectors will take an especially hard hit. Travel is reduced to the most essential journeys only and airlines such as Ryanair (which remained in 19th place on the Top 1000) and Aer Lingus (which also held steady at 54th) are sure to see a huge impact on turnover, which could take some years to return to pre-crisis levels.

The already struggling Cityjet has had an examiner appointed and aircraft lessor Avolon has warned many airlines are seeking rent deferrals.

No sector will be left untouched, however. In April, cardboard box-making giant Smurfit Kappa Group announced it would not pay a €193 million final dividend on last year’s earnings -- it had slipped to 16th from 14th in the Top 1000, despite turnover being slightly up.

Another Irish heavyweight, Kingspan (27th on the Top 1000 this year) announced its sales dropped 35 per cent as construction slowed to a halt, while Grafton Group (39th) said it was trading at as little as 10 per cent of normal volumes in some markets.

Fruit and vegetable producer Total Produce (up in spot to 23rd) has said its revenues will be down this year, but should remain “satisfactory”, while meat processors such as ABP Food Group (40th), Dawn Meats (56th) and Kepak (73rd) are all contending with drastically reduced export demand, while some have also had to close plants due to Covid-19 outbreaks.

The supermarket chains, all of which slipped slightly in the Top 1000 this year (due to relative outperformance by other companies), should see markedly higher revenues for the first half of 2020, but they’ll have to wait and see if this smooths out or drops dramatically once the country adjusts to the new normal.

Medtronic once again reported the highest profits in Ireland, although its 2019 figure of €4.8 billion was actually down on its 2018 high of over €5 billion.

SAP came storming into this league table, showing up as the second most profitable business based in Ireland, with profits of €2.9 billion in 2018, up from €710 million in the previous year. This eye-popping increase was largely attributable, says the company, to dividend income.

New to the Top 1000 overall, Johnson Controls also takes its place on the list of most profitable enterprises this year.

Holding steady on the list are pharma giant Shire, once again reporting profits of about €2.4 billion, and power management specialists Eaton Corp, which also had profits of €2.4 billion, up from €2.1 billion last year. Likewise, CRH reappears, with profits up more than €500 million to €2.1 billion.

The Central Bank, the second most profitable entity on our previous list, has slipped slightly after profits there fell by €233 million, as shown in its most recent accounts.

Microsoft, usually a regular on this list, didn’t make the cut of the top 10 most profitable companies last year, but has returned to form in this year’s list, with a marked increase in stated pre-tax profits from €992 million last year to €1.7 billion this year.

Adobe also saw skyrocketing profits from its Irish operations, with pretax profits more than doubling to €1.9 billion in the year to the end of November 2018 (the most recent available accounts).

Of the 10 businesses racking up the highest losses, five remain in the list since the previous edition -- Mallinckrodt, Skillsoft, Oracle, Theravance Biopharma and software firm PTC.

Among those firms that posted pre-tax losses of €100 million plus last time out, those that have returned to profitability in the year include Smurfit Kappa, Hannover Life and GE Capital European Funding.