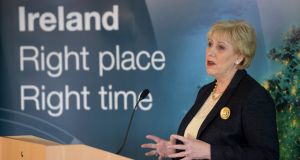 Minister for Business, Enterprise and Innovation, Heather Humphreys will attend the IDA’s annual results this morning

The Government has been accused of “anti rural bias” following a year in which IDA visits to potential foreign direct investment sites have continued to focus heavily on Dublin. Mark Hilliard reports.

Danish group Obton and Irish company Shannon Energy plan to spend €300 million to develop solar farms in the Republic, capable of producing 150MW of electricity, enough energy to cover the yearly consumption of 25,000 homes. Barry O’Halloran has the details.

On the employment front, there is good news from KPMG, which will add 800 jobs to its Irish operation this year, half of which will be targeted at experienced professionals. It comes as the Republic’s unemployment rate stood at 4.8 per cent in December, the lowest recorded since January 2007.

As for Brexit, Revenue appointed 586 staff last year to roles related to the UK’s departure from the EU, and there was a significant increase in the number of businesses engaging with the State agency. It comes as a new report today warns up to 85 per cent of small and medium-sized companies in Ireland are likely to be negatively impacted by Brexit.

Ciara O’Brien reports that revenues at Irish homebuilder Glenveagh Properties rose more than 200 per cent in 2019 as the number of properties it sold increased and the average selling price achieved climbed higher.

In his column this morning, Ciarán Hancock predicts another year of dysfunction ahead for Ireland’s property sector, particularly with an upcoming general election.