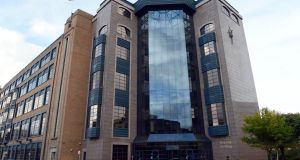 Last month the NTMA said it planned to raise between €10bn and €14bn in bond markets this year. Photograph: Eric Luke

and JOE BRENNAN The Republic has moved again to get ahead of a new-year rush by European governments to raise debt by hiring banks to sell 15-year bonds which are expected to raise €3 billion.

The National Treasury Management Agency (NTMA), which manages the Republic’s debt, said on Tuesday that it has hired Davy, Deutsche Bank, JP Morgan, Morgan Stanley, NatWest Markets and Nomura as joint lead managers for the bonds.

The bonds are likely to be sold on Wednesday against the backdrop of strong demand for safe haven investments like bonds as markets monitor tension in the Middle East after a US air strike killed top Iranian general Qassem Suleimani last Friday.

While the NTMA did not detail the amount it is looking to raise, sources said it is expected to raise €3 billion. That would equate to almost a third of the minimum full-year target the agency has set for itself.

“Ireland has a strong track record of accessing markets early in the year, with January traditionally being the busiest month for new issuance,” said Ryan McGrath, head of fixed-income strategy at Cantor Fitzgerald Ireland.

“The backdrop is supportive, with Ireland’s credit rating having been upgraded [by Standard & Poor’s in late November] to an AA grade, leaving it in a position to benefit from a flight to quality investments in bonds caused by what’s going on in the Middle East.

“In addition, concerns about Brexit have eased somewhat, and the Irish fiscal story remains incredibly strong.”

However, NTMA chief economist Rossa White noted in an investor presentation that Irish corporation tax receipts, which have surprised on the upside in recent years, faced risks from international tax reform efforts.

Mr White said that if the UK fails to conclude a trade agreement with the EU by the end of the year, “we have to hope that the transition period is extended significantly beyond the year-end”.

Demand for euro zone bonds has been underpinned since the European Central Bank relaunched its quantitative easing bond-buying programme in November at a pace of €20 billion per month.

A government bond due to mature in 2033, two years before the new bond will fall due, is currently trading to carry a market interest rate, or yield, of 0.3 per cent.

Last month the NTMA said it planned to raise between €10 billion and €14 billion in the bond markets this year. That compares with the €15.4 billion it raised in 2019, which was itself at the lower end of its €14 billion to €18 billion target.

The agency said in December that it planned to focus on repaying debt as the Government promises a broadly balanced budget. It has started off the year with about €16 billion of cash on its books.

The biggest single bond maturity this year is €10.6 billion of debt that falls due in April. A further €6.5 billion falls due in October.