Customs registrations rise, with more than 24,100 businesses acquiring an operator and identification number 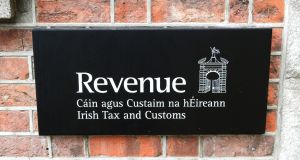 Revenue collected almost €74bn in 2019, including €58.4bn in taxes and duties for the Exchequer. Photograph: iStock

Revenue appointed 586 staff to Brexit-related roles last year as the UK’s deadline for leaving the European Union loomed, and there was a significant increase in the number of businesses engaging with the State agency.

Revenue chairman Niall Cody said the body wrote to more than 103,000 businesses with Brexit preparatory advice, and contacted a further 29,000 businesses by phone.

“As a result of these engagement programmes there was a significant increase in customs registrations, with over 24,100 businesses acquiring an Economic Operator and Identification (EORI) number in 2019.”

The organisation revealed the figures in its preliminary results for 2019.

Revenue collected almost €74 billion in 2019, including €58.4 billion in taxes and duties for the Exchequer. The remaining €15.5 billion was collected on behalf of other Government departments, agencies and EU member states. Total income tax, USC and PRSI paid to the Exchequer for 2019 was €31.6 billion.

“Along with increased Exchequer receipts, there was continued very high levels of timely, voluntary compliance, reflecting the fact that the vast majority of taxpayers do the right thing and pay the right amount of tax on time,” Mr Cody said.

Among the changes made in 2019 to tax systems was the introduction of real time reporting arrangements for PAYE on January 1st. More than 181,600 employers made 6.1 million payroll submissions, reporting gross pay and pensions of over €98 billion last year.

The new system allows taxpayers to view their pay, tax, USC and PRSI as reported to Revenue by their employer, with more than 191,000 such taxpayers availing of this service.

1 Suspicions rife as key Brexit trade talks begin in Brussels
2 Life as a Facebook moderator: ‘People are awful. This is what my job has taught me’
3 Irish companies restrict travel over coronavirus fears
4 Bogus notion that supply will cure our housing woes
5 ‘The only time apartments were viable was in . . . Ballsbridge, Killiney and Dalkey’
6 Coronavirus rocks financial world as hopes for containment fade
7 Bank leaked my loan request to family who tried to rip me off
8 First time buyers behind large increase in new mortgage approvals
9 Pharma giant AbbVie warned Government against ‘unfair’ €572m tax bill
10 We have little chance of building enough homes to meet election promises
Real news has value SUBSCRIBE