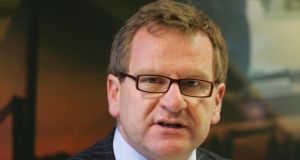 Ibec chief executive Danny McCoy: “Brexit is a threat to our living standards and our economic ambition. There can be no complacency.” Photograph: Eric Luke

Ibec has warned of a “Brexit day trade cliff” if the UK exits the bloc without a trade deal. The employers’ group said there was no guarantee the UK government would change its hard Brexit strategy in the wake of this month’s surprise election result.

As a result, the risk of a damaging split with Britain exiting the EU customs union without agreeing a free trade deal remains. This could lead to major disruption and legal uncertainty at entry and exit ports, airports and along the EU’s land border.

If such a “cliff-edge scenario” were to be avoided, comprehensive transitional arrangements were needed to bridge the gap between a UK exit and a new EU-UK free trade agreement, the group said.

In a document, published to coincide with the start of the Brexit negotiations this week, Ibec sets out what it describes as key priorities for the negotiations.

It suggested an agreement on trade and customs on the island of Ireland should be framed in the first phase of talks.

Significantly, it suggested any tariff and tariff rate quotas that form part of a new EU-UK free trade agreement must take into account existing trade flows. It also called for a new EU-UK regulatory co-operation framework to minimise regulatory divergence. Another key priority was the maintenance of the Ireland-UK Common Travel Area.

Ibec also said a temporary EU state aid framework was needed to support the most affected companies and sectors. It suggested the European Globalisation Adjustment Fund could be repurposed to address the economic fallout of Brexit.

“If the UK crashes out of Europe, Ireland will need all the policy levers available to respond. State aid will be needed to support companies through any period of adjustment, and tax and labour market policy will need to ensure Ireland remains internationally competitive,” Ibec chief executive Danny McCoy said.

In its report, the organisation said Ireland’s trade links with the UK were most likely underestimated by the headline economic indicators, leaving us uniquely exposed to the disruption of Brexit.

Mr McCoy said the surprise UK election result offered a fresh opportunity for the UK to shift its divisive hard-Brexit trajectory. However, he noted there was a significant gap between the UK’s stated objectives and what is realistically possible within the EU’s negotiating guidelines.

“The Irish economy is powering ahead and is well-positioned to respond to any Brexit upheaval, but the risks are very real. Brexit is a threat to our living standards and our economic ambition. There can be no complacency,” Mr McCoy said.