ECB sees inflation this year at just 1.5 per cent, still short of its 2 per cent target 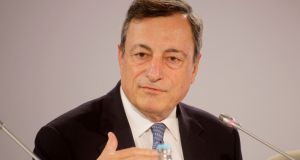 ECB president Mario Draghi at a news conference in the Estonian capital of Tallinn on Thursday. Photograph: Valda Kalnina/EPA

The European Central Bank closed the door on more interest rate cuts on Thursday, judging the euro-zone economy to be rebounding. But it said inflation looks to remain weak for years so it still needs to pump out the cash.

The currency bloc has been on its best economic run since the global financial crisis nearly a decade ago, with millions of jobs created since the ECB’s stimulus effort started. But inflation is barely moving upwards and growth may be plateauing, putting the Frankfurt regulator into a difficult spot.

Acknowledging improved prospects, the ECB dropped a pledge to cut rates if necessary and gave up a long-standing reference to risks to the economy, declaring the outlook “balanced”.

Yet rate setters did not even discuss winding down the ECB’s €2.3 trillion asset purchase scheme, kept rates below zero, and pledged very substantial accommodation.

The ECB also cut most of its inflation projections, even as it predicted better growth, suggesting it has been overestimating the impact of rapid job creation on wages and ultimately prices.

“We consider that risks to the growth outlook are now broadly balanced,” ECB president Mario Draghi told a news conference in the Estonian capital of Tallinn.

He said the bank removed the language about potentially lowering interest rates because ultra-low inflation risks have gone.

“[But] if these risks were to reappear, we would certainly be ready to lower rates,” he said.

With Thursday’s decision, the ECB’s deposit rate, its key policy tool, remains at -0.4 per cent. Its monthly asset purchases will continue to total €60 billion a month and to run until at least December.

Playing down the significance of its new guidance and the forecast cuts, Draghi said the general path of inflation had not changed and rate cuts were not impossible, giving his message a dovish tilt.

“Nothing substantial has happened to inflation except the price of oil and the price of food . . . Underlying inflation has remained the same year to year,” he noted.

The next major test will come in September, when the bank will probably decide whether to continue bond buys beyond this year or start to wind them down, known as tapering.

The ECB said it now saw inflation this year at just 1.5 per cent, down from a previous forecast of 1.7 per cent and still short of its target of close to 2 per cent. – (Reuters)

Microsoft and SSE Airtricity team up on solar panels for Irish schools 04:24
New car prices could rise by up to €10,000 if taxes increase in budget 04:03
Qatar Airways got €1.7bn government lifeline after losses widened 17:20
Chris Johns: Boohoo exposed on pay and conditions in digital economy 14:34
Hotel bookings collapse in wake of additional Covid restrictions 13:56