Q&A: After a year of claim, counterclaim and posturing, what happens on day one? 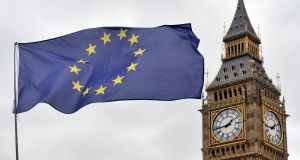 The formal Brexit talks will begin on Monday. Is Ireland’s Border likely to come up? Only as a mention. Photograph: PA

We’ve heard of nothing but Brexit talk for a year... why is Monday special?

Because today the formal discussions leading to the UK’s withdrawal in 2019 begin. Or some of them, at least.

What have been called the “divorce talks” open with discussions on three preliminary priority issues: how to treat UK and EU citizens resident in each other’s territory when the UK leaves, how much the UK owes because of its previous commitments to EU programmes and things such as officials’ pensions, and how to create a “seamless” Border on the island of Ireland.

Who is meeting whom?

Michel Barnier, a former EU commissioner and now the EU’s chief negotiator, will meet the UK Brexit secretary, David Davis, with their respective teams in the Brussels HQ of the commission, the Berlaymont, at 11.00am on Monday. The session is expected to run all day.

No. Except perhaps in agreeing a schedule for these talks and the separate strand of talks on “the future relationship” post-Brexit – ie trade. The EU will tell the UK that the latter can only begin when “substantial progress” is made on the priority issues.

What is substantial progress ?

No one is quite sure – the EU leaders will decide, probably in October.

Is the Border likely to come up?

Only as a mention. On the other two priority issues the commission has already sent the UK detailed papers suggesting how they can broken down into their multiplicity of component parts and tackled in the talks.

The Irish paper is still in preparation. The UK has still given no indication, beyond broad generalisations of what it wants.

Is the EU bill to the UK really going to be €100 billion?

That’s the Financial Times’s well-informed estimate, but the commission is refusing to be drawn and the UK is pooh-poohing all suggestions.

Any figure is likely to be toxic to UK politics and so all are agreed that the priority now is to put off calculating it until the very final stages of the talks.

To make it appear that progress is being made ahead of October, a methodology for the calculation will probably be agreed.

Will we know how things are progressing?

The EU side is making a virtue of the fact that its team will be constantly monitored by the ministers of the 27 member states and so has promised a completely “transparent” process. The UK is not pleased.