Chris Johns: Just wait until austerity-fatigued voters have to live through a Brexit-driven economic slowdown 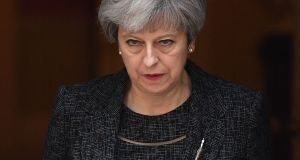 Having run an astonishingly inept campaign Theresa May immediately demonstrated her utter lack of negotiating skills by declaring a deal with the DUP before one had been agreed. Photograph: Getty Images

It keeps getting worse for Theresa May. Her fateful decision to call the recent general election is now widely described as reckless a gamble as David Cameron’s idiotic Brexit referendum.

Having run an astonishingly inept campaign she immediately demonstrated her utter lack of negotiating skills by declaring a deal with the Democratic Unionist Party before one had been agreed.

But it really is worse than this. Finally, the economy is now visibly slowing. Inflation is on the rise, thanks mostly to the post-Brexit fall in sterling: the resulting squeeze on real incomes will dent consumer confidence and depress retail sales further.

Over the past few days we have witnessed plenty of evidence that shoppers are reluctant to spend.

The Tories are caught in the grip of twin fears. On the one hand there is the growing realisation that a rock-hard Brexit is a deeply unpopular idea with the electorate.

Another Brexit referendum would almost certainly result in a vote to Remain. The other, equally appalling vista for all Conservatives, Remainers or Leavers, is that the next general election might have to be called in the teeth of an economic slowdown or even recession.

That would almost certainly hand the keys of 10 Downing Street to Jeremy Corbyn. If the slowdown does develop further, expect the Tories to rally around May and dig in for a full five year term, in the hope of better economic news when the cycle turns.

Some of us think that May has squandered more than just a favourable moment in the business cycle. The Conservative Party may not stand for much but at least it has always been able to lay claim to a safe pair of hands.

Many a Tory election manifesto has been based on the idea that a vote for anyone else risks chaos: ‘Vote Conservative if you want stability and things to remain pretty much the way they are. A vote for the other lot is a huge risk.’

Britain is many things at the moment but stable is not one of them. Its politics (and many politicians) are unhinged and the economy is in trouble. In the next general election campaign the Tories will be faced with a Jeremy Corbyn offering to restore calm.

And still it gets worse. That rise in inflation has now unexpectedly prompted three members of the Bank of England’s key monetary policy committee to vote for an immediate interest rate rise. That was a 5-3 split, so a rise in mortgage and other interest rates is getting very close.

Notwithstanding an obvious economic slowdown, the grandees of the bank are getting worried about inflation. That’s their job: inflation is now above target and likely to stay there for some time to come.

If most young people voted for Labour earlier this month, none of them will vote for the Tories next time around if they now have to live through their first ever hike in interest rates.

Pollsters are starting to analyse the election results and one stark conclusion is already in: the younger the voter the more likely they were to vote Labour. Yougov, for instance, notes that in all age groups up to 47 years old, voters were more likely to opt for Jeremy Corbyn.

That’s a younger generation looking at their elders rapidly pulling up housing, job and pension ladders behind them. It’s no surprise that young people are becoming unusually, but understandably, politicised.

If the economy didn’t feature very much during the most recent election it is likely to dominate the next. There is widespread acceptance that if voters said anything about economic policy it was to resoundingly reject austerity.

That’s hardly surprising: austerity has been going on for years and still hasn’t worked as promised.

In many ways this is at the heart of the current British malaise: blame Brussels for the consequences of decades of poor UK policy making, including Osborne-Cameron austerity.

That’s utterly bogus of course and scapegoating the EU can’t last much longer: it will be clear that what happens next will be an entirely domestic affair. Just wait until austerity-fatigued voters have to live through an economic slowdown.

There really is a generation of voters who have never experienced the upwards leg of the rate cycle or, indeed, interest rates significantly above zero.

The mere threat of higher interest rates will come as another blow to highly indebted consumers. And will also kick the housing market at a time when it is looking pretty soft.

If there is such a thing as a perfect political and economic storm, Theresa May seems to have sailed straight into it.

The politicians, newspaper editors and owners who led the charge into Brexit will be the least to suffer from its consequences.

The British have only just started to work this out. It’s going to get worse.

Dior to open boutique in Brown Thomas later this year 14:59
Davy chief executive and deputy chairman resign in fallout from €4.1m Central Bank fine 13:57
Liam Carroll’s legacy in property market will be debated for years to come 05:41
Officials may release beef carcasses from a herd whose location was unknown 6 Mar
Women on Air calls for ‘hard data’ and broadcasting quotas 6 Mar