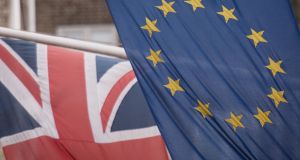 The UK’s Brexit policy continues to be shaped by domestic political concerns, not economic considerations, and “we all stand to lose out as a result”, employers’ group Ibec has warned.

Chief executive Danny McCoy said the UK’s plan to leave the customs union was at odds with the economic interest of both the UK and EU. “ It will disrupt existing trade flows, add new financial and administrative costs and put jobs at risk.”

Mr McCoy was speaking in the wake of calls from its UK counterpart, the Confederation of British Industry (CBI), for the UK to remain in a customs union with the EU post-Brexit.

The CBI will set out the position on Monday at an event at the University of Warwick. It is expected to call for the future EU-UK relationship to be firmly based on established existing shared rules which already support millions of jobs and communities across Europe.

“The UK remaining in a customs union would partially offset the negative impact of Brexit on jobs and the economy in the UK, Ireland and the wider EU,” Mr McCoy said.

“It would also go some way to resolving the challenges posed by the trade border with Northern Ireland. However, without a UK commitment to the single market, significant problems for Irish business remain.”