Prices in Dublin fell by 1.3% in the 12 months to September, according to CSO figures 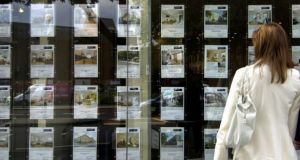 Property prices nationally have increased by 85.3 per cent from their trough in early 2013.

Property prices are now rising by just 1.1 per cent, the lowest level in more than six years, as the pick-up in housing supply continues to cool the market.

The latest official figures from the Central Statistics Office (CSO) show prices in Dublin, which has seen the largest increase in residential construction, actually fell by 1.3 per cent in the 12 months to September, and were down by nearly 7 per cent in Dún Laoghaire-Rathdown, which is traditionally seen as a bellwether for the market.

The figures come as separate CSO data points to a significant upturn in housing completions in the third quarter, including an 81 per cent jump in apartment completions, most of which were located in Dublin.

The latest Residential Property Price Index shows the typical cost or median price of a home in the Republic in the 12 months to September was €265,000.

This represented an annual increase of just 1 per cent, the lowest level of inflation recorded since August 2013, and down from 8.5 per cent a year ago.

Property prices in the Republic, excluding Dublin, were 3.6 per cent higher in the year to September. The region outside of Dublin that saw the largest rise in prices was the Border area, at 11.8 per cent, while the smallest rise was recorded in the mid-east, at 0.2 per cent.

Separate figures also released on Thursday by the CSO showed that the number of new homes completed in the first nine months of the year totalled 14,764 , an increase of 18 per cent on the same period last year. Last year a total of 17,995 new dwellings were completed over the 12 months and this is forecast to rise to above 21,000 for the whole of 2019.

“The growth in new home completions is welcome and shows that Government initiatives such as the Strategic Housing Developments and Help-to-Buy scheme are working,” David Duffy, director of Property Industry Ireland, said.

However, dwelling completions remain below estimated new household formation of 35,000 per annum, he said.

“It now seems likely that housing completions for 2019 will be approximately 21,000. This is below what was anticipated at the start of the year,” he said.

“The delay in announcing the extension to the Help-to-Buy scheme and the Strategic Housing Development process created uncertainty for homebuilders,” he said.

Goodbody analyst Dermot O’Leary said: “We remain of the view that house price inflation will eventually settle in line with wage growth, currently 3-4 per cent in light of the macroprudential rules.” He predicted a pick-up in price growth in the fourth quarter.

“And in some areas, prices are now actually lower than this time last year,” he said.

“Overall growth is likely to remain fairly muted in the remainder of the year and into 2020, with the biggest price rises coming from outside the capital,” he added.

1 Brown Thomas and Arnotts to cut 150 jobs due to coronavirus crisis
2 47,000 homes need to be built each year to solve housing crisis, report says
3 Jervis shopping centre takes major tenants to court over rent disputes
4 Can Covid free your workplace of bureaucracy?
5 Seán FitzPatrick makes fresh bid to secure planning for new Greystones home
6 Hairdressing 7% more expensive in July as prices declined across economy
7 How Argentina and its creditors thrashed out a $65bn deal
8 Digital pollution: ‘We have a pandemic of data and 90% of it is crap’
9 Energia’s owner ‘plans to sell it later this year’ in deal worth €2bn
10 New home completions drop 32% in second quarter
Real news has value SUBSCRIBE