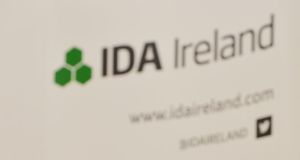 IDA’s total land holdings comprise about 10,500 acres across the State, although most of this is already occupied by client companies. Photograph: Alan Betson

IDA Ireland, the State agency responsible for attracting foreign investment, has acquired a major development site in Kildare large enough to accommodate a “mega-client” as it begins to replenish its land bank.

The agency has agreed to pay at least €10 million for a 211-acre site just outside Newbridge at Littleconnell, adjacent to a Pfizer factory, a Wyeth pharma plant and also a new distribution hub for German discount retailer Lidl.

Most of the site was assembled by companies connected to the construction empire of developer Chris Bennett. The sale to IDA was facilitated by the National Asset Management Agency, which held security over the site.

Industry sources said it was large enough for IDA to construct a business park. But it is also considered a desirable strategic site that could be of interest to a single, large foreign multinational manufacturer, as it is located near the M7 motorway within Dublin’s economic catchment area.

It was suggested by industry sources that major IDA clients considering investing in the State would be “brought straight from the plane” to view such a large and desirable development site.

The site was available in two separate lots, including 98 acres zoned mostly for warehousing and industrial use, with a further lot of 113 acres of mostly agricultural land. It is situated between Naas and Newbridge.

The site is situated about one mile from the motorway. A relief road for the area is currently under construction and passes through the centre of the site.

The IDA is due to release a new multiyear strategy early next year, and it is understood to be examining its future property needs in this context. The agency did not comment directly on its purchase of the Newbridge site or the price paid.

However, it said the “availability of suitable sites across Ireland has been key to IDA’s success in securing foreign direct investment”.

“IDA Ireland’s land bank is actively managed and reviewed on a constant basis – the importance of the availability of these ‘strategic sites’ cannot be overstated,” the agency said. Nama declined to comment.

IDA’s total land holdings comprise about 10,500 acres across the State, although most of this is already occupied by client companies. In mid-2018, the agency was reported as confirming that about a quarter, or 2,900 acres, was being “actively marketed” to potential investors.

The significance of the €10 million Newbridge deal is illustrated by the fact that it is larger than the total amount spent by the agency on land acquisition in either 2017 or 2018, when the combined total was €16.7 million.

Other notable IDA land purchases in recent years include €7.5 million for an 18-acre site in Leixlip, near Intel’s plant. In 2018, it also paid €3.44 million for 69 acres in Kilkenny and €1.1 million for lands at Ringaskiddy in Cork.

The agency’s land bank has been raised by opposition politicians on several occasions in recent years in the context of the ongoing housing crisis, and whether IDA land could be used for building homes.

The agency and the Government have always strongly defended its land use, however, pointing out that it needs to have a ready pipeline of potential facilities for foreign investors to create jobs here.