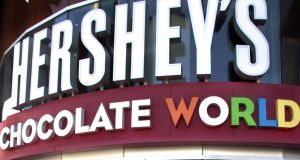 US confectionary giant Hershey has taken a significant minority stake in fast-growing Irish snack brand Fulfil. The move gives America’s largest chocolate and snacks brand the change to expand its presence in a European market, but it also suggests a likely future assault on the US market by the Irish company which was founded only at the start of 2016.

The bosses of Ireland’s top 20 companies earned 41 times more than their employees, widening the gap on the previous year as they secured a collective pay rise of 13 per cent, research from The Irish Times has found. Peter Hamilton reports.

Economic growth will fall to 4 per cent this year and dip further to 2.7 per cent next year – and that’s based on a Brexit deal being reached, the State’s largest business lobby group has forecast. In its quarterly reportIbec found that we have now reached the peak of the global business cycle, with a moderation in growth expected as global economies mature.

The Government is to consider the introduction of legislation which would ensure workers have the right to switch off and no longer feel the obligation to check work-related emails outside office hours. In 2017, the French government introduced an employment law which obliges organisations to guarantee their employees a right to disconnect from technology. The measure was introduced to tackle the so-called “always-on” work culture that has led to a surge in usually unpaid overtime.

“Sterling staged a minor rally this week, driven by speculation about a Corbyn-led government of national unity (GNU). That’s one sentence I never thought I would write.” So says Chris Johns in his column this week where he questions whether the UK is facing a future as a failed state after Brexit.

Sean Mulryan’s Ballymore held the topping out ceremony yesterday for one of its London developments – Wardian – which is believed to have a construction cost of about £566 million (€619 million). Adjacent to Canary Wharf, the 55-storey, residential-led development is set to complete next year and yesterday’s ceremony, common for large-scale developments, followed the installation of the last beam on the structures.