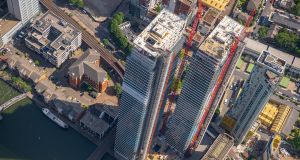 Wardian London near Canary Wharf is believed to have a construction cost of about €619 million. Photograph: Jason Hawkes

Sean Mulryan’s Ballymore held the topping out ceremony yesterday for one of its London developments – Wardian – which is believed to have a construction cost of about £566 million (€619 million).

Adjacent to Canary Wharf, the 55-storey, residential-led development is set to complete next year and yesterday’s ceremony, common for large-scale developments, followed the installation of the last beam on the structures.

“Ballymore has owned the site on which Wardian now stands for 25 years so it brings me great joy to see these two beautiful new towers standing on what has been such an underutilised space for so long,” Mr Mulryan said.

“This is a huge milestone for the development and we cannot wait to see the first units complete and first residents move in early next year.”

Wardian comprises two residential towers of 55 and 50 storeys which contain 766 homes including suites, one- and two-bedroom apartments and penthouses.

Designed in collaboration with Glenn Howells Architects, Wardian London developed a system whereby so called “sky gardens” cool incoming air to avoid sole reliance on air conditioning. Projecting terraces have also been designed to provide greater shade to the facade of the building. Each apartment also has a private “sky garden”, some of which run to more than 37sq m in size.

In addition to its gardens, the development has amenities including a gym, swimming pool, cinema and a resident lounge.

While mainly active in the UK, Ballymore is also developing a number of sites in Ireland including the Dublin Landings development which is being delivered in partnership with Singaporean developer Oxley. Oxley and Ballymore agreed to sell the residential element of 268 homes on that site for €154.6 million in July.

1 Oxford Covid vaccine trials offer hope for elderly
2 Ulster Bank to introduce new card payment controls on app
3 Hurrah for the companies giving staff more time off
4 How much state pension will I get next year?
5 Sustainable investment: How your pension can help tackle climate change
6 RTÉ to seek 70 voluntary redundancies as ‘large costs’ beckon in 2021
7 Apple planning updates to its AirPods earbuds next year
8 Some Irish money market funds came close to danger in March
9 How long can Government afford to keep State pension age at 66?
10 Aryzta to pursue asset sales as takeover talks fail
Real news has value SUBSCRIBE