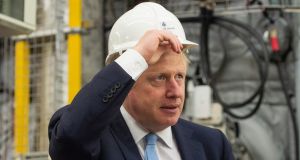 The story of the day is the Sunday Times’s report on leaked UK government documents which set out the most likely aftershocks of a no-deal Brexit rather than worst case scenarios. Dubbed Operation Yellowhammer, the memos spell out a no-deal Brexit Britain facing shortages of fuel, food and medicine, a three-month meltdown at its ports, a hard border with Ireland and rising costs in social care.

A separate story reports a poll finding that almost three out of five voters in Northern Ireland favour a “border in the Irish Sea” compromise on Brexit to avoid up to 40,000 job losses and an economic shock for its food and farming sectors,.

Meanwhile, the Sunday Telegraph reports that the UK’s Brexit secretary has signed the “commencement order” that will trigger the end of the supremacy of European Union law in the UK on Halloween.

It also has a story on how local authorities have rejected 35 per cent of properties offered by the National Asset Management Agency (Nama) as social housing since it was established in 2012.

Meanwhile, the Sunday Independent reports that the help-to-buy scheme could return in October’s budget but in a form that would essentially exclude Dublin. The scheme provides a tax rebate of up to 5 per cent on the cost of a newly-built property, up to a limit of €20,000.

Fineos valued at more than €400m

Fineos, a Dublin software company, has been valued at more than €400 million in a stock market listing in Australia, giving its founder Michael Kelly a shareholding worth at least €250 million, according to the Sunday Times. More than half the company’s revenue comes from customers in Australia and New Zealand, prompting it to list in Sydney.

Marian O’Gorman, who heads up the retailer Kilkenny Group, speaks to the Sunday Independent about the fallout from a bitter two-year row with her son Greg over the business. Describing the episode as a “difficult time personally” she says the business is now seeking acquisitions, having bought a restaurant and a retail business in Kerry earlier this year.

Businesses could be waiting years for the cost of their insurance to fall, with the State’s consumer watchdog warning that a new inquiry into the sector will not be completed until late 2020 at the earliest. The Sunday Business Post reports the Competition and Consumer Protection Commission has informed the Minister that it could take up to 64 weeks to complete the study in the “best-case” scenario.