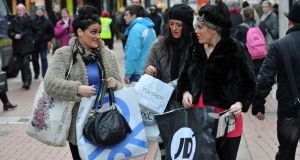 Ibec is forecasting growth in consumer spending will fall to 2.5% this year. Photograph: Frank Miller

Economic growth will fall to 4 per cent this year and dip further to 2.7 per cent next year – and that’s based on a Brexit deal being reached, the State’s largest business lobby group has forecast.

In its quarterly report Ibec found that we have now reached the peak of the global business cycle, with a moderation in growth expected as global economies mature.

However, Ibec’s forecast assumes that in the event that no Brexit deal is reached, and the UK crashes out on October 31st, economic growth would more than halve in 2020 and employment growth could fall below 0.5 per cent. It also expects continued sterling depreciation, cancelled investment, falling consumer confidence and significant trade disruption.

“However, the story is not all positive. 2018 was the first year where the value of Irish indigenous exports fell since 2011. This trend has been reversed in the early months of 2019 driven by continued increases in production in both the alcohol and dairy sectors. Both sectors will face challenges over the coming year due to US tariffs and Brexit.

“Ibec analysis has shown that Irish goods are the most exposed, on a per capita basis, to the proposed US tariffs on EU goods. Irish exports worth €818 million could be hit by new tariffs,” Mr Brady said.

Ibec’s report argued that the Government should not repeat past mistakes in the face of any global slowdown. The best preparation, it said, is to follow through on funding key areas of economic infrastructure through the national development plan and by setting out a clear plan for the funding of higher education.

The business lobby group expects consumer spending to fall to 2.5 per cent growth this year and 2 per cent growth in 2020. Uncertainty surrounding Brexit, it flagged, could translate into deeper declines in the purchase of big ticket items such as cars.

“Even in the event of a Brexit breakthrough there are reasons to believe that growth will slow over the coming years,” said Mr Brady. “The global trading environment is becoming more difficult for small open economies due to rising trade tensions. The global economy is also close to the top of the business cycle. These factors are now cutting through to the real economy in Europe. ”

The report noted concerns about the health of the European economy, with German manufactures particularly badly hit due to their reliance on foreign demand, including from China. Similarly, signs of a US slowdown are beginning to show with US-China trade tensions continuing.

Finally, Ibec suggested that the advantage Ireland had as a result of its corporate tax rate may be starting to diminish. It said the list of countries within 10 points of Ireland’s effective corporate tax rate includes Denmark, Finland, Israel, Sweden and the UK. In 2003, the average tax advantage the Republic had with those countries was over 18 percentage points. Ibec said it expected the trend to continue.