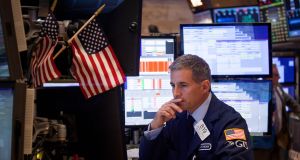 Tax reform, the strength of the dollar and the pace of wage gains stand to set the tone on the American market this year, Goldman Sachs says. Photograph: Michael Nagle/Bloomberg

Goldman Sachs has identified three big items that will shape the equity landscape this year – and they all hinge on the impact of president-elect Donald Trump’s policies.

Tax reform, the strength of the dollar and the pace of wage gains stand to set the tone on the American market this year, chief US equity strategist David Kostin and his team at the investment bank wrote in a note to clients. Here’s why:

“Corporate tax reform represents key source of hope,’’ the strategist wrote. That’s especially true for sectors that tend to have higher tax rates, such as brick-and-mortar retailers, energy producers and makers of consumer products. It’s not yet clear how Trump’s proposed measures will look when they come out of Congress, so Goldman ginned up a table on how various scenarios would impact earnings for S&P 500 companies. A cut to 25 per cent from the current 35 per cent statutory rate on domestic income, for instance, would boost profit in the large-cap benchmark by 8 per cent.

The dollar has strengthened dramatically since Trump was elected, as investors speculate his policies will boost domestic growth rates. Even after the greenback reached a 14-year high last week, Goldman thinks there is more room to run if Trump can pass infrastructure spending and roll back some regulations. The obvious play, then, is to buy stocks that have a high percentage of their sales concentrated in the US.

Lastly, US workers are starting to see faster gains in their paychecks as the labour market tightens. That’s great news for the average Joe, but could hurt companies with high marginal labour costs. In fact, wages are now showing their fastest gains since the last recession ended, with average hourly earnings surging 2.9 per cent. Fast-food and retail stores could see earnings crimped as costs rise.

Overall, Goldman predicts the coming year won’t be that kind to US stock investors. While it sees the S&P 500 Index rising to 2,400 during the first three months of the year – a 5.4 per cent climb from Friday’s close – the investment bank expects the equity benchmark to finish at 2,300, implying a gain of just 2.3 per cent in 2017. The basis for their moderate pessimism is that expectations of sweeping tax reform will provide a boost in the first quarter, but some of that exuberance will fade as the year wears on; especially if enacted policies aren’t as business friendly as currently expected.