Norwegian may sell tickets for US flights from Cork next month 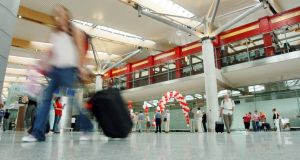 Cork Airport said all markets grew last year, but the biggest expansion in percentage terms was on German routes

Norwegian Air International could begin selling tickets for its proposed US flights from Cork next month, according to the airport.

The Irish-based airline is due to launch services to secondary airports close to Boston and New York later this year after US authorities gave it permission to fly there last month.

Cork Airport’s head of communications Kevin Cullinane said on Monday that the transatlantic services were due to take off in summer “with tickets due to go on sale in February”.

The airline, an Irish subsidiary of Scandinavian group Norwegian Air Shuttle, originally intended launching services from Cork and Shannon last year, but a delay in getting approval from the US authorities prevented this.

Norwegian intends using its Irish company to launch low-cost transatlantic flights between Europe and the US, with ticket prices beginning at $69 (€65) one-way, although it will charge for meals and checked-in baggage.

Cork said that all markets grew last year, but the biggest expansion in percentage terms was on German routes, which were up 75 per cent, aided by the addition of a service to Dusseldorf and strong inbound traffic.

Portugal performed next best with growth of 35.5 per cent, while Spanish routes had 13.5 per cent more passengers. The number of people travelling to the UK increased 7 per cent.

Mr Cullinane described the performance as pleasing. “We have been working hard over recent years implementing our return-to-growth strategy, and we saw the first fruits of this work in 2016.