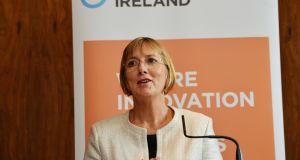 Julie Sinnamon: “I’ve no doubt that the UK will get their act together and really begin to proactively try and attract more companies there.” Photograph: Alan Betson

Enterprise Ireland is advising firms here to prepare for a hard Brexit amid growing signs the British government may opt to quit the single market in order to regain full control over immigration.

The agency’s chief executive, Julie Sinnamon, said it would be “foolish” to do otherwise given the current signals from Downing Street.

She was speaking in the wake of UK prime minister Theresa May’s suggestion that Britain would not attempt to cling on to “bits of EU membership” in its negotiations with Brussels.

“Irrespective of Theresa May’s comments, we have to prepare for the worst. And if it becomes a softer Brexit, then we’re in a stronger position,” Ms Sinnamon said at the publication of Enterprise Ireland’s latest annual report.

A key plank of the agency’s Brexit strategy was getting companies to look at new market opportunities while consolidating their position in the UK market, she said.

The UK’s share of Irish exports has fallen from 45 per cent to 37 per cent in the past decade, and this trend will likely be accelerated by Brexit, Ms Sinnamon said.

She also confirmed that a number of high-profile businesses in the agri-food sector here were now being courted by UK agencies about the possibility of setting up operations there in the wake of Brexit.

The Republic’s €10 billion food sector is the most vulnerable to Brexit with more than half of the State’s food output going to the UK.

“At this stage, companies are not saying we’re closing up shop and going [to the UK], but I’ve no doubt that the UK will get their act together and really begin to proactively try and attract more companies there,” she said, noting that a disparity in state aid constraints in the wake of Brexit would make things more competitive.

In its annual report for 2016, Enterprise Ireland revealed that a record 201,000 people were now employed by agency-backed firms,

The report said 19,244 new jobs were created by agency-supported businesses last year. This translates into a net increase of 9,117 new roles once job losses are deducted.

Almost two-thirds of these new jobs in 2016 were outside Dublin, with all regions recording increases in employment. Digital technology, construction and fintech were the key performing sectors.

The agency also announced an ambitious target to create 60,000 new jobs over the next three years while at the same time increasing the value of exports by €5 billion annually.

Despite global economic challenges, Enterprise Ireland attributed the strong performance by Irish businesses over the past three years to an improving entrepreneurial climate for start-ups, dynamic Irish companies innovating and scaling up in key sectors such as food, fintech, business process outsourcing, nonfood manufacturing, ICT and construction.

“As these results show, Irish companies have an unparalleled capacity to create jobs in towns and cities right around the country, with almost two-thirds of the new jobs created outside Dublin,” she said.

“The fact that over 130,000 of those 201,000 jobs are outside of Dublin is significant,” she added. “Every region has benefited from these results.”