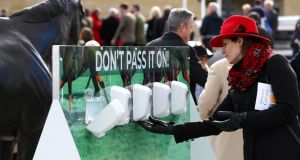 Image of the week: Race against time

It was “full steam ahead” at this week’s Cheltenham Festival, perhaps the highest profile event to avoid being cancelled or held behind closed doors. The organisers have placed some 24 hand sanitiser boards about the racecourse in a, hopefully, successful bid to stop themselves acquiring a prominent role in the future coronavirus movie. While attendance is down on last year, some 60,000 punters have been rocking up to Cheltenham from Tuesday onwards to see which horses are jumping the best this year, and it didn’t look like social distancing was top of their list of concerns. Let’s just pray every racegoer eschewing the wider nervousness about mass gatherings is as attentive to hygiene as this woman, who appears to be at least thinking about testing out the gel on her leather gloves.

In numbers: Down Under decline

Number of years since Australia was last in recession, a global record. But the fallout from coronavirus will end that run with two negative quarters in the first half of 2020, forecasters at Bloomberg and the bank Westpac have separately predicted.

Drop in international passenger traffic to Sydney airport in February, with the trend worsening in March.

Plunge in the Australian dollar against the US dollar in less than 20 minutes on Monday, with the panicky currency markets resulting in its biggest one-day decline since 2008.

Getting to know: Thomas Bach

Not too long ago International Olympic Committee (IOC) president Thomas Bach must have thought Russian state-sponsored doping was his biggest problem. Now the thorny matter of whether or not Tokyo 2020 can go ahead is resting very heavily on his shoulders. For now the IOC maintains the position that the games will neither be cancelled nor postponed, with former Olympic fencer Bach declaring himself confident that they will start on time on July 24th, and encouraging athletes to continue their preparations. But the big name sponsors that have poured billions into Tokyo 2020 are worried, and now one member of the Tokyo 2020 executive board, Haruyuki Takahashi, has gone off message, saying the organisers need to be prepared for any possibility and suggesting a delay of one or two years as the “most feasible” option. For gold medallist Bach (66), the shine has well and truly been taken off this Olympic run-in.

Flybe fell into administration, while Ryanair and Aer Lingus are among the airlines to have cancelled flights to and from locked-down Italy. But what other responses has coronavirus triggered across the aviation sector?

1. Qantas. Its Irish chief executive Alan Joyce will forgo his salary for the rest of the financial year as part of a serious of measures announced by the heavily hit Australian carrier.

2. Air New Zealand. The airline said on Monday that it was “not in a position to provide an earnings outlook” to the stock market at this time given the pace at which the crisis was unfolding

3. Virgin Atlantic. In a much-criticised move, Virgin has admitted to flying near-empty “ghost flights” in order to comply with use-it-or-lose-it rules on airport slots, which the European Commission has now suspended.

4. Lufthansa. The German airline is considering grounding its entire fleet of A380 superjumbos.

5. Air France-KLM. Canadian chief executive Ben Smith has predicted the disruption will “most definitely” accelerate consolidation in the beleaguered industry.