Not everyone laughing as Leave.EU makes Waterford home 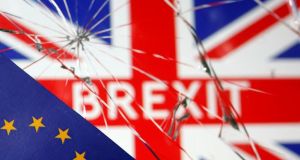 Over 80,000 registrants were locked out of their .eu accounts last week but Leave.EU wasn’t one of them

News that pro-Brexit campaign Leave.EU has relocated its offices to Waterford has, for the most part, been met with wry smiles.

The hypocrisy of an organisation that loathes Europe but is nonetheless prepared to move simply in order to keep an “.eu” internet address can’t but cause smirks, especially on these shores.

Having played its part in “freeing” Britain from the European Union, Leave.EU and many other UK-based organisations suddenly found they could no longer be able to keep the European domain suffix unless they shifted to a member state.

More than 80,000 registrants were locked out of their .eu accounts last week after Britain finally exited. Leave.EU, which is bankrolled by Ukip founder Aaron Banks and has been subject to a number of investigations, moved fast to ensure it could continue pumping out anti-Europe sentiment.

Some people don’t see the funny side, however. Take Neale Richmond. Fine Gael’s spokesman on European Affairs said the relocation of Leave.EU was unwelcome given the group’s “reprehensible record”.

“Leave.EU is an odious campaign group that has spread fear and disinformation throughout the Brexit referendum and subsequent negotiation process,” he said.

“The relocation of Leave.EU to Waterford is certainly not a Brexit dividend and the basing of such an organisation here should not be welcomed nor should it be easy,” Mr Richmond added.

The politician warned about the Republic becoming a “brass plate of convenience” for the grouping and fired off a letter to the communications regulator, ComReg, querying the legitimacy of the relocation. He also placed parliamentary questions to Minister for Communications Eamon Ryan.

ComReg seemed bemused when asked what it intended to do about the matter. It stressed that the matter lies outside its area of responsibility. EuRID, the European registry which operates the .eu domain, was sympathetic, but stressed that it is the European Commission which sets the eligibility criteria regarding who gets to have a .eu internet address. It added the group had followed the correct procedures.

Mr Richmond told The Irish Times he was also intending to contact the commission on the issue. Mr Banks meanwhile responded to a tweet from the TD on the issue by predicting Irexit.

“Always good to upset third-rate Irish politicians in love with the EU. The Irish will follow suit and leave the EU in due course,” he tweeted.