Has Trump been right all along about China?

Research indicates China – not automation – responsible for decline of US manufacturing 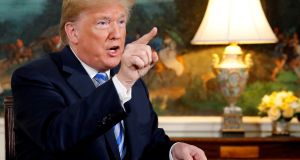 Throughout his presidential campaign, Donald Trump claimed hard-working citizens had been sold out for corporate America. Photograph: Jonathan Ernst/Reuters

Over the last three decades, the US has haemorrhaged manufacturing jobs, losing close to five million since 2000. The decline has been unprecedented by US standards and has created, or at least compounded, what’s often referred to as a rust belt from the Midwest to the Great Lakes, an area that spans from western New York to Michigan and north Illinois and encompasses states like West Virginia, Ohio and Indiana.

It was once the backbone of US industry, but it has now become synonymous with economic decline, population loss and urban decay. The reason for this hollowing out is still debated, but it’s probably the single biggest factor behind the rise of Donald Trump.

The traditional explanation has been automation. Firms adopted new technologies to boost production, putting workers out of jobs in the process, an inevitable consequence of the computer age and robotisation. There has been a welter of academic research to support this theory and it has, up to now, been taken as gospel by the US establishment.

Trump, however, had a different scapegoat: China. Throughout his presidential campaign, he claimed hard-working citizens had been sold out for corporate America, and that the introduction of China into the global trading system was the root cause of much economic hardship in middle America.

Now it turns out Trump’s story of US manufacturing decline is closer to the truth than the traditional technological progress explanation. A study by economist Susan Houseman of the WE Upjohn Institute in Michigan argues that much of the productivity growth associated with automation and robotisation has been a mirage, and that the real output growth has been more sluggish than previously thought and more consistent with previous eras.

She concludes that most of the manufacturing jobs lost after 2000 was more likely to be related to China than to automation, underscoring Trump’s thesis. Essentially cheap Chinese labour and a cheap Chinese currency prompted thousands of US firms to shut up shop in the US and transfer operations abroad. Whatever you might think of Trump, he seems to have had his finger on the pulse of this one.