Boomtime for hotels as Dublin thronged with tourists

Cantillon: Room rates up 9.5% on last year as capital gets set for more new hotels 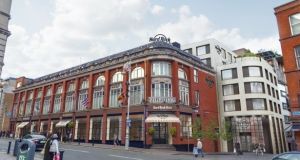 Who wouldn’t want to be a hotelier right now? There may be concerns over the impact of Brexit and the corresponding decline in UK visitors, but outside of that it is very much boomtime for the sector right now.

That this is all happening despite the growing popularity of Airbnb may be surprising but is true nonetheless.

As if evidence were needed of the boom, one need only look at the number of hotels currently being built in the capital.

This week alone plans were announced to bring the Hard Rock Hotel franchise to Lord Edward Street while on Friday, EasyHotel, the group established by EasyJet founder Stelios Haji-Ioannou, said it had acquired a freehold site in central Dublin for €9 million with plans to build a purpose-built, 130-bedroom hotel.

It isn’t just Dublin that is seeing a lift though. The Irish Hotels Federation (IHF) recently reported a boost to business on the back of an increasing number of visitors from North America and continental Europe.

The volume of visitors from mainland Europe increased 5 per cent to 3.25 million last year while the number of North American tourists rose 16 per cent to 1.7 million. Disappointingly, there has been a decline in UK visitors but the overall picture is positive with 60 per cent of IHF members reporting a rise in business levels.

Taoiseach Leo Varadkar offered another reason for hoteliers to smile earlier this month when he signalled that the tax breaks introduced for hotels during the downturn will likely remain.

As for STR, it suggested that the good times may continue for some time. It said that with Dublin remaining a popular tourist destination, demand for rooms will likely stay strong for the foreseeable future.