US economic growth accelerates to 4.1% 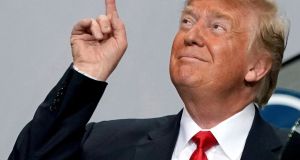 The US economy accelerated in the second quarter of this year with growth hitting an annual rate of 4.1 per cent.

The first estimate of US growth in the three months to June 30th matched the estimates of Wall Street economists compiled in a Reuters poll. In the first quarter, the US economy grew at an annual rate of 2.2 per cent, according to the US commerce department.

The second-quarter growth was the fastest recorded by the US since the third quarter of 2014.

Ahead of Friday’s release US President Donald Trump, who has made boosting growth one his main economic promises, broke with tradition by predicting a “terrific” number.

1 Boeing identifies new software flaw in grounded 737 Max
2 Barclays to cut 100 senior roles as lender seeks to rein in costs
3 The Irish economy is thriving but if you’re not feeling it – here’s why
4 Irish people like nothing more than being bribed with their own money
5 Slack lease the lure as ESB seeks €168m for Fitzwilliam 28
6 Second-biggest diamond in history gets new owner
7 Construction body calls for loan scheme to help first-time buyers
8 Coming home to west Cork, from all over the world
9 Is Rebuilding Ireland Home Loan scheme open for business?
10 Dublin housebuilder records €11m gain after striking deal with bankers
Real news has value SUBSCRIBE