Michael Hasenstab bets against euro in ‘hedge against populism’ 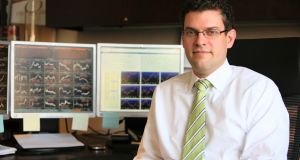 Michael Hasenstab is betting against the euro, a striking position for an investment manager celebrated in Europe for throwing the weight of Franklin Templeton’s flagship bond fund behind Ireland and Hungary as they emerged from the debt crisis.

Calling the position “a hedge against populism”, the manager of the $41 billion Templeton Global Bond fund said: “If everything was normal in Europe, the euro is probably fundamentally a bit undervalued, but things are not normal in Europe. When people start to question the very foundation, the legitimacy of the currency, that’s a structural change.”

Speaking to the Financial Times, his comments highlight the concerns of many international investors, amplified following a campaign pledge from Marine Le Pen, presidential candidate of the far right in France’s upcoming presidential election, to withdraw the country from Europe’s single currency.

The investor’s shift also reflects a potential inversion of long-standing assumptions about the political and economic realities of regions of the world, favouring the debt of Latin American nations recovering from the effects of populist regimes, while shunning Europe, where populism is in the ascendant.

In 2011 Mr Hasenstab was a vocal champion of Irish and Hungarian government debt, backing policies designed to restore confidence in the countries’ finances at a time when many questioned the future of the euro.

Now he has no “material” positions in Europe, holding small amounts of Portuguese and Serbian bonds. Hungarian and Polish debt was sold because, like Ireland, prices had risen substantially, but also due to political developments.

Hungarian prime minister Viktor Orban has made a hardline stance on immigration the signature of his administration, while transforming Hungary’s ruling Fidesz party into a radical Eurosceptic grouping. Poland’s government this month mounted a bitter opposition campaign against the re-election of Donald Tusk, a former Polish prime minister, to president of the European Council.

“They are near the epicentre of this politically challenged environment in Europe,” said Mr Hasenstab, contrasting it to the situation in 2011 when there was political unity to agree unpopular but necessary bailouts.

“You’ve got this pressure on governments that are not nationalist, but can’t really govern as effectively as they would maybe wish to,” he said. “You don’t know how this will necessarily play out, but you know that the drivers of this nationalism related to immigration . . . terrorism and [the] refugee crisis. Unfortunately none of these are going away.”

Selling the currency acts as a form of insurance against the chaos likely were the future of the euro to come into question. But the investor, who has long experience watching populist regimes in emerging markets, also anticipates what follows. “The immediate implication is fiscal loosening – you start spending to try buy votes,” he said.

After a two-year period of trailing his investment benchmark, when the funds managed by Mr Hasenstab’s team dropped by more than a third, performance has picked up in the past year with the Global Bond fund returning 10.5 per cent to put it in the top handful of funds in its category, according to Morningstar.

The sales of European bonds were used to skew the portfolio towards Latin America for the first time since he took over the fund in 2001, with large holdings of Brazilian, Columbian, Argentine and Mexican debt, after what he said was the “end of a decade of populism”.

The idea is to invest in countries where what matters most is a domestic political agenda, rather than global movements in commodity prices or the value of the US dollar, which have tended to prompt flows of capital in and out of emerging markets.

For instance, while Brazil is experiencing its worst recession in history, Michel Temer, its president, has attempted to rein in spending and tackle public pension arrangements. “The structural reforms Brazil is undertaking are pretty historic,” said Mr Hasenstab, reflecting a general investor enthusiasm that has also prompted big rises for the Brazilian currency and stock market over the previous year.

Argentina also stands out as a country where a 15-year absence from international capital markets following a 2001 default means its total outstanding debt, both public and private sector, stands below 20 per cent of annual economic output. “This is just a story about bringing a country back to life, allowing companies to borrow again,” the investor said.

The cautionary tale of populism, meanwhile, remains. Venezuela’s economy has in large part ceased to function, but the government has yet to default. “It’s moved beyond an economic crisis to a full-on humanitarian crisis,” Mr Hasenstab said. “There is no reason they should be servicing that US dollar debt.”