Pressing fiscal question is when will the ECB be prepared to follow the Federal Reserve? 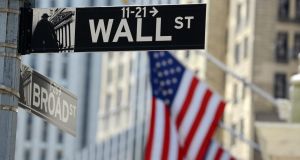 The immediate reaction to the Fed bulletin was a fall in the US dollar. Photograph: Getty Images

US interest rates are on the rise. Little more than a month ago there was significant doubt among market analysts about whether another interest rate increase would be announced at Wednesday’s meeting, following on from a rise in December.

Clear hints from senior Fed figures, including chair Janet Yellen. changed the mood in the meantime, so that the 0.25 of a point rise to a range between 0.75 and 1 per cent was widely anticipated.

Ironically, the immediate story after the meeting was that there was no indication from the Fed that rates would rise for the rest of this year faster than earlier signalled, despite stronger economic data. Rates will continue to rise, the Fed said,but gradually. The immediate reaction was a fall in the US dollar.

It is worth standing back from the immediate fray. In the US at least, the era of super-low interest rates is slowly coming to an end. Remember that from December 2008 until December 2015, US base interest rates were effectively zero. A rate increase at the end of 2015 was seen at the time as the start of a sustained upward move. But market turmoil early in 2016 and mixed US economic signals meant the Fed could not move to increase rates again until a full year later.

Now the pace of interest rate increases look to be finally speeding up, backed – as the Fed statement on Wednesday said – by rising employment and increasing inflation. Uncertainties remain – not least which policies President Donald Trump chooses to introduce. But for the first time since the crash we are now looking at a steady upward move in US short-term interest rates.

The Fed governors expect two further rises this year and three in 2018 and see rates at a still-moderate 3 per cent by 2019, broadly unchanged from their previous estimates. Rates may be on the rise, but the average in the years ahead will still be low by historical standards. The Fed largely stuck with its previous estimates of the pace of increases up to 2019 and the language of its statement was, if anything, a bit less bullish than expected.

Euro zone interest rates will follow US rates higher at some stage. But it is not yet clear when. There are, for the first time since the crisis, clear enough signs of a pick-up in euro zone growth and prices. But the euro zone is a long way behind the US.

The question now is whether euro zone rates will start to rise next year, or whether it will – as market forward prices suggest – be 2019 before the first rise. All we can say, looking at the US experience, is that expectations can change quickly, depending on the economic data.