Official reading of -0.4% in June reflects research findings on impact of sterling on prices here 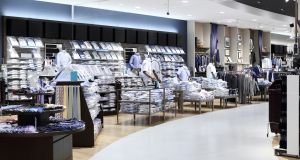 Consumer prices drop in 12 months to the end of June as the cost of clothing and footwear plummets. Photograph: iStock

Overall, prices as measured by the consumer price index were 0.4 per cent lower in June than they were a year ago, with the cost of clothing and footwear witnessing the biggest annual fall.

The latest figures come as a new Central Bank research paper highlights the impact of sterling volatility on Irish consumer prices. It found that the recent Brexit-related crash of sterling meant the consumer price index was 1.2 percentage points lower than it would otherwise be.

The research, which assesses the impact of sterling volatility on consumer prices here, found that a 1 per cent fall in the value of the British currency could in turn see Irish prices decrease by 0.15 per cent over the course of a year.

It also warned of further knock-on effects here from shifts in sterling as the Brexit negotiations heated up.

The Central Bank’s finding goes some way to explaining why Irish inflation remained lower than all other euro area countries throughout 2016.

“Understanding the importance of sterling in driving consumer goods inflation is imperative, as forthcoming negotiations surrounding British exit from the EU are likely to have major consequences for the euro-sterling exchange rate,” the paper said.

Within the consumer price index published Thursday, the cost of clothing and footwear witnessed the biggest fall, dropping by 5.3 per cent in the last 12 months while the cost of food and non-alcoholic beverages fell by 2.7 per cent.

Conversely prices in restaurants and hotels were up by 1.8 per cent while the cost of education and health rose by 1.7 per cent and 1.4 per cent respectively.

The Central Statistics Office, the price of food and non-alcoholic beverages fell due to lower prices across a range of products. The same did not apply to the clothing and footwear sectors where prices dropped as a result of decreasing sales.

It was higher prices for alcoholic drinks and food consumer in licensed premises and restaurants, as well as an increase in the cost of hotel accommodation, that caused the spike in prices for restaurants and hotels overall.

Davy economist David McNamara said inflation for the full year might now undershoot the broker’s target of 1 per cent.

“The key driver of the decline in inflation has been the move in sterling,” he said. “One-third of Irish consumer goods are imported from the UK, and the depreciation in the currency has helped to push the goods consumer price index to down 2.9 per cent in June.

“A renewed fall in energy prices also contributed,” he said. “In contrast, domestically-driven services inflation remains in positive territory, but annual inflation weakened to 1.5 per cent in June from 1.9 per cent in May, driven by a sharp fall in air fares.”

Alan McQuaid, an economist at Merrion Capital, said base effects “should see the inflation rate picking up sharply in the second half of 2017”.

1 In six months we will be in the grip of a 1980s-style recession
2 Angela Merkel sweeps in to save the euro zone
3 Property price drop of up to 12% this year a ‘reasonable’ assumption – McDonagh
4 Avoca wins battle with Monkstown locals over cafe operation
5 Donohoe warns of cost of pandemic as budget deficit swells to €6.1 billion in May
6 Chartered Land moves closer to approval for Dublin’s tallest tower
7 Aer Lingus wants quarantine period axed to resume flights in July
8 Should my mam wait for house prices to drop before buying?
9 Brother is dragging his heels as executor of uncle’s will - is there anything I can do?
10 The fight over how to pay for the global economic recovery has begun
Real news has value SUBSCRIBE