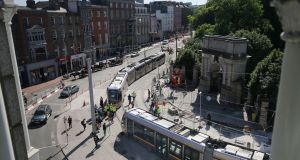 Ibec, the business and employer lobby group, has urged the Government to be more ambitious in the budget by making maximum use of the fiscal rules to allow for additional capacity for capital investment.

In its pre-Budget 2018 submission, Ibec has called on the Minister for Finance Paschal Donohoe to include the near 25 per cent GDP growth rate recorded for 2015 in the way it calculates its headroom for spending under European Union fiscal rules.

According to Ibec’s calculations, this would give the Minister the ability to invest an additional €7.2 billion between 2018 and 2021.

Ibec said the Minister’s decision to exclude the 2015 GDP figure from its calculations “would be a mistake”.

It also wants the Government to abandon its plan for a “rainy-day fund”, arguing that it would make “little material difference” in the event of another economic shock and “must be used to provide the infrastructural capacity to meet demographic demands”.

Mr Donohue recently reduced the amount that would be paid into this fund from 2019 to €500 million annually from the €1 billion originally announced by his predecessor Michael Noonan.

Ibec has also reiterated its call for a €1.2 billion mitigation fund, part funded by the EU, to support indigenous businesses impacted by Brexit.

In addition, Ibec has called for a rollback on the proposed sugar tax, or at least for it to have a sunset clause included, for child benefit to be means tested (potentially saving between €200 and €500 million depending on the method chosen), and for excise duties on alcohol to be reduced by 3.5 per cent.

It wants the saving from means testing child benefit to be used on improving childcare affordability and quality, which it argues would improve the incentive to work.

Ibec is also seeking a number of specific measures to support SMEs, at a cost to the exchequer of €60 million in 2018.

These include increasing the lifetime cap on entrepreneurs’ relief from capital gains tax from €1 million to €15 million.

It also wants the introduction of a simplified research and development tax credit to assist smaller firms to overcome funding constraints.

And it is seeking the introduction of an enterprise management incentive scheme for smaller firms. It noted that Sweden recently received clearance from the European Commission to abolish tax on stock options at companies young than 10 years, with fewer than 50 employees, and revenue and a balance sheet below €8 million.

In addition, Ibec wants the operation of the knowledge development box to be reviewed to ensure it remains “best in class”.

Fergal O’Brien, Ibec’s director of policy and public affairs, said Ireland was at a “critical juncture” in its development, with risks to global trade and investment, including Brexit, the population forecast to rise by about a million over the next 15 years, and “chronic shortages” in infrastructure.

“Ibec has consistently drawn attention to the limited ambition from Government when it comes to the delivery of key infrastructure projects,” Mr O’Brien said. “We welcome the recent Government decision to reverse its debt reduction strategy of 45 per cent of GDP to allow for more capital investment.

“But the Government can, and must, do even more to implement long-term planning for our economy and place a sharper focus on increased infrastructure and education investment with the exchequer funds now available.

“Better use must also be made of public-private partnership, and other non-exchequer finance, such as from the European Investment Bank.”