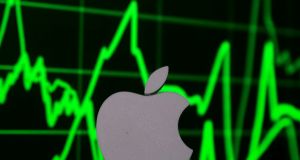 It is estimated that Apple will have to pay between €13 billion and €15 billion, including interest, pending the outcome of the legal appeals. Photograph: Reuters

The state plans to hold up to €15 billion of back-taxes to be collected from iPhone maker Apple in “low risk” investments as both appeal a European Commission ruling that the money is owned in the first place.

The Department of Finance said on Saturday that it and Apple have agreed to seek the services of a custodian and investment managers to manage the money as it is held in escrow as both appeal the original EU decision from August last year. The appeals process may take between four and six years.

“It is intended that the fund will be denominated in euro and will be invested in low-risk assets (primarily fixed income instruments) with the principal investment objective being to preserve capital to the extent possible in light of prevailing market conditions,” according to procurement documents published on Monday through the EU tendering process.

The successful custodian, which will oversee the activities of investment managers, must have had at least €3 trillion of assets under custody in each of the last three financial years and been in charge of at least €500 billion of fixed-income assets, such as bonds or other debt investments.

The National Treasury Management Agency has been left in charge of procuring a custodian, which is expected to conclude in the middle of November. This indicates that it will be the end of the year before the Republic will start collecting the money from Apple.

The department estimates that it will need to collect between €13 billion and €15 billion from Apple, including interest, pending the outcome of the legal appeals.

The Government is exempt under EU laws from having to hold an EU procurement process for actual investment managers to run the day-to-day activities of the fund. However, the department has said “in order to secure value for money, a competitive tender process will be undertaken” outside the scope of the EU public procurement rules.

The terms of this process are currently being agreed between the Minister for Finance Paschal Donohoe and Apple.