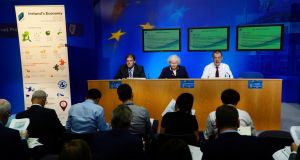 Christopher Sibley, Jennifer Banim and Michael Connolly of the CSO brief the media on the new measurements at Government Buildings. Photograph: Cyril Byrne

On top of its quarterly national accounts and balance of payment data, which can leave one’s head spinning at the best of times, the agency rolled out a new statistical toy, known as modified gross national income (GNI), pronounced GNI.

The indicator is designed to filter out the statistical noise associated with multinationals or, as the CSO puts it, remove the effects of globalisation. In other words, it strips out the profits of redomiciled companies, and better accounts for the relocation of intellectual property and aircraft leasing assets here.

The first eye-catching comparison to be made with the traditional gross domestic product (GDP) measure relates to the size of the Irish economy.

The new measure shrinks the size of the economy here by a third from €275 billion in GDP terms to just under €190 billion in modified GNI terms. It also hikes up our headline debt ratio to 106 per cent from 73 per cent, and suggests our peak debt ratio in 2012 was more likely to have been 160 per cent of national income rather than 120 per cent.

The new measure also suggests that when you adjust for globalisation factors such as intellectual property (IP), aircraft leasing and corporate inversion income, Ireland’s bumper current account surplus becomes a deficit, suggesting we are importing more than we’re exporting.

In theory, this means we’re consuming too much domestically and not exporting enough, which might strike some as strange given how often our bumper export trade is cited as such a success story.

The unadjusted current account measure is essentially being flattered to the tune of about €20-€30 billion by relocated IP assets and by profits from redomicilled PLCs which should flow out of the State but are instead accounted for as net exports, giving a faulty picture of Ireland’s export economy.

The new measure does not explain a big dip in the current account balance in 2016, which appears in both the adjusted and unadjusted indicators, and which may relate to the other great distorting factor in the Irish economy, contract manufacturing.

This is outsourcing used by multinationals, including Apple, whose Irish subsidiary hires third parties in China to produce and assemble computers.

Essentially, the new modified GNI measure has killed off some of the leprechauns but not all of them.

While the CSO puts the growth in Irish GDP for last year at 5.1 per cent, still the fastest in Europe, the increase in modified GNI was 9.4 per cent, albeit this metric did not account for price changes and therefore represents something of a bogus comparison.

The agency is, however, working on a modified GNI measure which will distil the actual increase in volume terms, allowing us to properly assess just how much that 26 per cent jump in GDP in 2015 flattered the economy here.