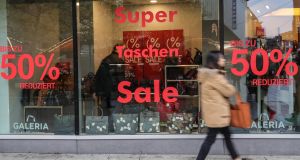 Germany narrowly avoided a technical recession last year as GDP declined in the second quarter and grew 0.1 per cent in the third. Photograph: EPA

The gross domestic product growth rate of 0.6 per cent, released on Wednesday by Germany’s statistics office, is the lowest since 2013’s 0.4 per cent expansion. The figure will heighten anxiety that a decade of export-driven expansion is giving way to a period of economic weakness, as tensions between the US and China, uncertainty over the impact of Brexit and structural shifts in key industries hit traditional German strengths.

The 2019 GDP figure marks a sharp decline from a year earlier, when growth reached 1.5 per cent, and 2017, when the German economy expanded 2.5 per cent.

Germany narrowly avoided a technical recession last year as GDP declined in the second quarter and grew 0.1 per cent in the third.

Wednesday’s release is likely to heighten political tensions in Berlin over Germany’s towering budget surplus. A growing number of political and business leaders want the government to boost public investment in an effort to bolster growth and improve the long-term prospects of the German economy.

Despite their appeals, however, there is no sign that the government of Angela Merkel is ready to give up their commitment to balanced budgets. Finance minister Olaf Scholz this week unveiled a record €13.5 billion surplus in the federal budget. – Copyright The Financial Times Limited 2020