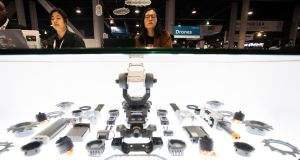 Ireland faces increasingly stiff competition from eastern European states that are modelling their pitch to multinationals on the Irish approach, the boss of the IDA has warned. Mark Paul reports that while Martin Shanahan declined to name any particular state, trade officials have privately cited Lithuania as one country that wants to copy Ireland’s model.

Meanwhile, the British Irish Chamber of Commerce has warned that Brexit could jeopardise €46 billion in services trade between the Republic and the UK.

A record ¤13 billion in food, drink and horticulture exports from the Republic last year was somewhat overshadowed by a fall in meat and livestock exports, according to new figures from Bord Bia.

Irish oil explorer Petrel Resources said it was urgently seeking an explanation from one of its shareholders after a payment due for a tranche of shares failed to arrive on time. Petrel’s shares closed 46 per cent down yesterday.

Cantillon takes issue with Ryanair’s claim to be the “the greenest and cleanest” in Europe and considers Dublin’s growing attraction for the world’s biggest law firm s. Global giant Dentons yesterday announced plans to build out a corporate practice in the city with 50 lawyers within the next two years.

In the property market, Irish retailer Eason has sold its store on Patrick Street in Cork to a company connected with Sports Direct owner Mike Ashley. Ciarán Hancock reports.

Ciarán is joined by Cork entrepreneur Norman Crowley for this week’s Inside Business podcast. During the show, Crowley outlines how his energy efficiency company, Crowley Carbon, is on target to double its overall revenues to €200 million this year. He also discusses his two latest ventures: Electrifi Classic Cars and a “meatless meat” business due to launch later this year.

In our tech coverage, Karlin Lillington says the Government is hanging taxpayers out to dry in the row over the public services card debacle, while on a happier note Ciara O’Brien assesses the key trends at this year’s CES electronics show. She also puts Virgin Media’s Complete Smart Home package to the test in this week’s tech review.